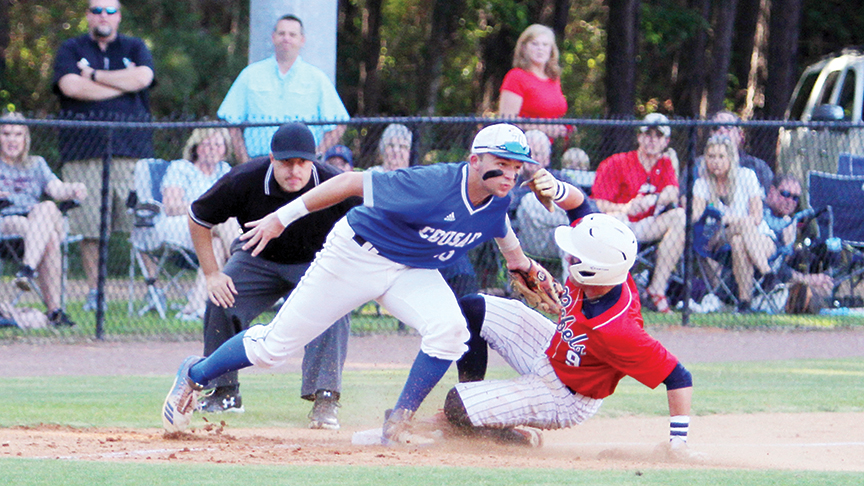 Photo by Sherlyn Evans Brady Spring, a junior infielder and pitcher, attempts to make a play at third base as a Tri-County runner slides into the bag on Thursday night.

How do they keep doing this? That’s what I’m thinking as I’m watching another never-say die, come from behind, bottom of the seventh Brookhaven Academy win. It’s the third time I’ve seen it in person and I’m still not sure where it comes from.

I ask player after player following the victory as they loiter on the field with family and friend for cell phone photo ops.

You hear the same clichés that we always use when a team comes from behind. Never say die, no quit, never give up. This feels different though. It’s almost as if they don’t have it in their DNA to ever get too far down emotionally — to never let their heads hang too low.

Senior Dawson Flowers has played in hundreds of baseball games in his life. The same can be said for the junior trio of Nick Ogden, Brady Spring and Tanner Watts. That’s less than half the starting lineup though. Before this season seniors Cade Brown and Keegan Smith had not played competitive baseball in years. Caston Thompson is a 10th grader as is Collin Waldrop. Judson Griffin is an eighth grader.

Maybe they just don’t know they should be nervous in big games? Do they not realize that being down three or four runs late in a game is a hole that most teams don’t dig out of?

“That might be it,” said Parvin. “They’ve come from behind all season. We were down 9-0 against Centreville in the fourth game of the season. We came all the way back and lost 10-9 on a walk-off in the bottom of the ninth. They’ve just never stopped fighting, all year.”

Their 8-7 title-clinching win over Tri-County was the eighth one-run win this season for the Cougars. Forty-three percent of their wins came via their final at-bat as BA won nine times when they either were tied or trailed heading into the last inning.

Brookhaven Academy won its first baseball state title in 1984 — starting second baseman Brown’s dad Winky was on that team — but in the following years the sport became an afterthought at the school.

The chain-link outfield fence was prone to fall over. Centerfield was used as a football practice space and gas was used to kill the grass and mark the football lines for practice.

Playoff appearances and district titles were few and far between. The original sign that honored the ’84 team became a rotting piece of plywood.

That all changed when BA hired Casey Edwards to lead the program. Edwards had his breakthrough season when his team won the AA championship series in 2010.

In the South State series — trailing one game to nothing against Centreville Academy — Edwards gave the ball to then senior right hander Parvin in back-to-back games. Parvin pitched two straight, gutsy wins as he threw 12-2 and 5-3 victories to send BA to the championship series.

Parvin then signed with Southwest and later graduated from Mississippi State. He was hired to be an assistant for Edwards and when the latter stepped away from coaching in the summer of 2015, Parvin moved into the head job at his alma mater.

Parvin won’t lead the Cougars next season as they move into the new MAIS 4A classification looking for a third straight state championship. He recently accepted a job as an assistant coach at Jackson Academy.

The job just made too much sense for Parvin to turn down. Since he got married in 2016 his wife K.T. has been commuting to Jackson every week for either work or school. Parvin wrestled with the decision to leave the only place he’s ever worked, but JA made him an offer he couldn’t refuse.

The reserved Parvin has won with class and leaves behind a program set up to continue an upward track in his absence.

BA began its season Feb. 18 with a matchup against MHSAA 6A Terry High on the campus of Co-Lin in Wesson. The Cougars lost 8-3 and committed 11 errors in the game. Parvin remarked afterwards that he was proud his team hadn’t lost by 15 after having so much trouble throwing and catching the ball.

After six games the team was 1-5 and no one was thinking about state championships at that point of the year.

“We really started to come together as a team after that,” said Smith. “It’s been a crazy season.”

Brown says it took time for Parvin and his staff of Jose Acosta and Randy Spring to figure out who should play where in the early season games.

“I played third base at the start of the season,” said Brown. “I figured out really quick that wasn’t going to work.  Coach moved me to second and that felt natural.”

Having good vibes coming from the dugout is another important part of a winning formula. Spring says the Cougars stayed loose thanks to the good juju coming from their younger teammates on the bench.

“Our dugout has great energy,” said Spring. “They let us know that we can always come back, no matter when we’re down.”

No love lost between Cougars and Rebels

BA baseball radio play-by-play man Beck Warren referred to the play between the teams as “chippy” several times in the series. That’s a nice way of saying the teams didn’t like each other.

Both squads were warned Thursday when Dawson Walters slid into Dawson Flowers at second base and the two had a confrontation after becoming entangled. The irony is the duo will be roommates next year for the Gulf Coast CC baseball team.

“That’s just the competitiveness coming out in both of us,” said Flowers. “It’s hard to win and be a nice guy all the time. Sometimes you’ve got to want to fight more than them.”

The loss was a bitter pill for TCA to swallow as head coach Graham Odom chased down the umpire crew as they exited the field. Some on that Tri-County side were claiming Spring didn’t touch home plate when he scored the winning run.

Last year the Cougars blew the doors off offensively as they trounced the Rebels in the championship series. This year there must have been at least five times over the two games this week that TCA felt like they had an insurmountable lead.

Next season TCA is in the new 3A classification while BA plays in the larger 4A class. The Cougars new district will include Cathedral and ACCS out of Natchez and Silliman and Oak Forest from Louisiana. Heritage Academy — who played for the AAA title this week —w ill also be 4A next season as will Simpson Academy and Magnolia Heights. Both of those schools made the AAAA-D2 finals this week with Mag Heights winning its second straight title.

The four-hour marathon that saw the Cougars come from behind twice on Tuesday to win game two nor the clutch hit from Ogden to deliver the trophy will soon be forgotten at BA. The improbability of it all will only makes the memories of this team sweeter.

“A lot of people probably doubted us because of all we lost offensively after last season,” said Flowers. “We worked harder than any team I’ve been part of in my time here. Different guys stepped up at the plate to produce and we had all of starting pitching coming back from last year. Keep plugging away, keep fighting, and keep scrapping — we just always believed if we kept doing that we’d get it done.”