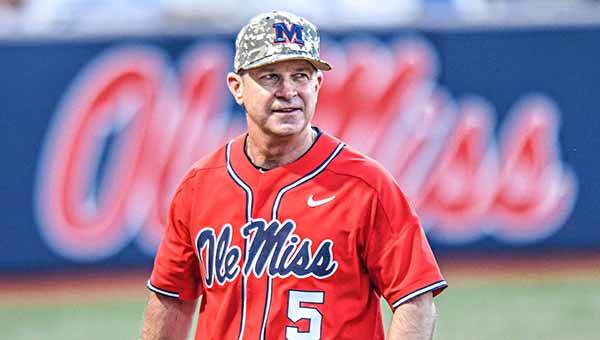 Ole Miss gets a bounce heading into SEC Tournament

JACKSON — In terms of the standings, Saturday’s 5-4 win over Tennessee in the season finale didn’t do a whole lot for Ole Miss.

It might have bumped them up a line or two in seeding for the Southeastern Conference Tournament and did give them a winning record in the league, but it was the intangibles it provided that were so much more important than a number in the win column.

Saturday’s victory snapped a six-game losing streak and gave the Rebels (33-23) a shot of confidence and adrenaline as they prepare to defend their SEC tournament championship this week in Hoover, Ala.

“Winning the game is obviously going to give us confidence. We were on a skid and that’s just part of the game. It’s just going to give us confidence going into the tournament and going into a regional, and that’s big for us,” Ole Miss third baseman Tyler Keenan said. “It was a big mental thing. We all know it’s part of the game. Losing and being on a skid is part of it, but we didn’t want to be there and winning that game was huge for us.”

Ole Miss will open the tournament Tuesday at 1 p.m. against Missouri (34-21-1), which took two of three games when the teams played a series in Columbia back in late March. That’s an eternity in college baseball terms, and Ole Miss shortstop Grae Kessinger said it was hard to take too much away from the earlier meetings other than a healthy respect for their opponent.

“You’re still getting your feet rolling at that point in the year and they’re still getting going. Parts of the pitching staff and your lineup change. Lots of things, I’m sure, are different,” Kessinger said. “It’s going to come down to who makes the most plays and the most pitches. It should be fun.”

Both teams are limping into the postseason. Missouri has lost four in a row, and five of six, while Ole Miss lost six in a row before its victory over Tennessee and has a 3-8 record in May.

There are some obvious reasons for the Rebels’ late slump — a bullpen that has struggled, an offense that has been shut out in its last two series openers — but Kessinger said it all boiled down to the Rebels getting away from what made them a Top 20 team during the first half of the season.

“We’ve had a couple of weeks where we stopped playing the ball we want to play. The good in it, though, is we know we can. We have all the belief in the world in each other and the guys,” Kessinger said. “For whatever reason it hasn’t worked the last couple of weeks and we haven’t been playing our best ball, but we’ve seen spurts of it and it’s just a matter of staying confident and taking it one pitch at a time. If you do that, then the ability’s there. It’ll turn for us.”

The Rebels will also be able to draw on some recent experience in Hoover. They won the tournament last season by battling through the losers’ bracket and winning four consecutive elimination games — two of them by one run.

“Getting the experience last year, you know what it takes. You know the focus and how to do it. Hopefully we can have a good week and play a little while,” Kessinger said.

The Rebels might need to make a deep run in the SEC Tournament to keep their NCAA Tournament hopes alive, as well. The six-game losing streak dropped their RPI ranking — the NCAA’s primary metric to determine at-large bids — to No. 31 in the country. That should be good enough to make the 64-team field, but a one-and-done performance in Hoover might open the door for other teams to pass them up.

If nothing else, Keenan said, a couple of wins this week would reassure the Rebels that the worst of their slump is over.

“I think we’ve done enough to get in, but I think it would be good for us to have a run,” Keenan said. “It’s big for a team to get on a roll and get hot, and it’d be big for us going into a regional.”