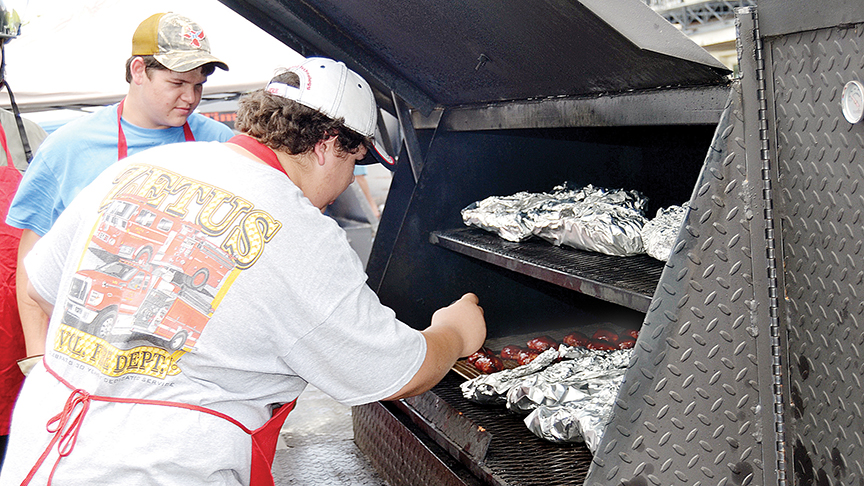 An annual barbecue festival is returning to downtown Brookhaven this weekend.

The Hog Wild Festival will be Friday and Saturday from 7 a.m. to 7 p.m. each day. There will be more than 40 vendors, entertainment and barbecue.

“I can’t wait for it to get here,” Capt. Mark Porter with the Brookhaven Fire Department said.

The festival will raise money for the five volunteer fire departments in Lincoln County, along with TEAAM Autism, which will receive 25 percent of the money raised.

This is the ninth year for the festival, and Porter has been there since the beginning.

Porter has fought fires for 15 years now, and he’s worked at the No. 2 Brookhaven Fire Station for seven years.

“I dreamed this up one day and here we are,” Porter said.

He had attended similar events and wanted to see one in Brookhaven.

The Hog Wild Festival is organized by a committee, with Porter included.

One reason the festival will donate money to TEAAM Autism is because one of the committee’s members has a child with autism. This is their way of showing support to the autistic community, he said.

There will be three types of cooking contests — the Kansas City Barbecue Society sanctioned contest, the Steak Cook-Off and the Kid’s Q Contest.

Space is available on a first-come basis. Limited electrical hookups are available, so teams are encouraged to bring a portable generator.

The Kansas City Barbecue Society Contest is Saturday. KCBS entry will include a 20- by 40-foot space.

There are four main categories for the contest — chicken, pork ribs, pork and beef brisket. Teams must enter all four categories to be eligible for Grand and Reserve Grand Champion.

KCBS teams are also asked to cook a supplied Boston butt to be turned in at the food tent by 9 a.m. Saturday. The entry fee is $250.

By winning the KCBS contest, teams can be eligible to compete in Sonny’s Smokin’ Showdown Invitational, the Jack Daniel’s Invitational and the Kansas City Royal Invitational.

The Steak Cook-Off is Friday night. It will include a 20- by 20-foot space and two ribeye steaks for competitors. Teams are not required to compete in the BBQ cookoff to compete in this event. The entry fee is $100.

The Kid’s Q Contest is Saturday. It will include a 20- by 20-foot space, and kids will compete in category according to age. Teams must provide their own supplies and meat, and cooking may be done on any heat source.

Ages 6-10 will cook hamburgers and ages 11-16 will cook boneless ribeye steaks. The entry fee for this contest is $50.

“I hope to raise a lot of money and to be able to help both of these causes,” Porter said. “I hope it’s a good turnout.”

Parking lots being used for the festival will close this afternoon. South Railroad Avenue will be closed from East Monticello Street to East Chickasaw Street beginning Friday at 5 p.m.