It takes a village to raise a ’Cat 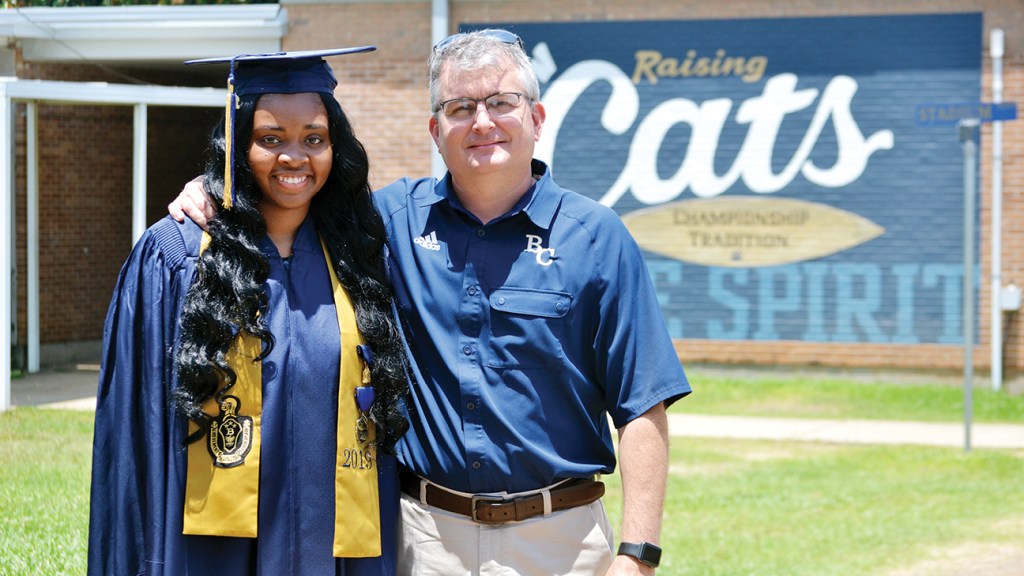 It takes a village to raise a ’Cat.

That village — the friends and family of Bogue Chitto graduating senior Sheryl Spraggins — will be cheering the 18-year-old on as she walks across the stage to accept her diploma tonight. Just four years ago, Spraggins was recovering from the first of two brain surgeries and learning to walk again.

Spraggins is the daughter of Sherry Spraggins of Bogue Chitto. She’s the older sister to Donald Spraggins, a rising junior at Mississippi School of the Arts, and 3-year-old Savannah Singleton.

She is graduating with a 3.8 GPA as a Mississippi Scholar. She’s a member of the National Honor Society and Senior Beta Club. She’s a senior representative for Student Council and a mentor in Big Cat, Little Cat, which is the Bogue Chitto Attendance Center’s equivalent to the Big Brother, Big Sister program.

Her fainting spells started her freshman year, and then the headaches came. She felt weak and sleepy all the time, which made it a struggle to stay active in class, sports and other school activities but she pushed through it.

Spraggins went to see Ashley Hickman, a nurse practitioner at King’s Daughters Medical Center’s Pediatric and Adolescent Clinic. Hickman pushed for an MRI and it showed what could become a brain bleed.

“She called me and said, ‘Wherever she is, you need to call her home,” Sherry Spraggins recalled.

The teen was at basketball practice, about to play in a game at school. Her coach told her to get her things and wait for her mother to pick her up. They planned to keep her quiet and relaxed until her doctor’s appointment the next day.

The next morning she went to school, but felt like knives were stabbing the back of her head. She started having seizures in the back seat on the way to Batson Children’s Hospital in Jackson.

“I had not ever felt anything like that,” she said.

At Batson, doctors found a tumor on her pituitary gland, which was putting pressure on her eye. There was a chance she could lose her sight if she didn’t have the surgery to remove it.

She had the surgery and spent nearly two months in the hospital. When she was home, her mother — who was nine months pregnant with Savannah — had to bathe her and feed her.

“I was feeling depressed to the point that I couldn’t do anything anymore. I felt like giving up. My support system, they helped me get back on track,” she said.

She kept up her work and started back to school with her classmates in the 10th grade, nearly making it through the full year. She had regained her strength and was doing everything she did before with the exception of playing basketball. Then the bad news came. Through routine tests, doctors spotted another mass. She left awards day at school to go to a doctor’s appointment at Batson.

“When I went up there I was in such a good mood, but when we got up there and they said, ‘We found another tumor in you,’ I lost all hope right then and there. I was just upset,” she said.

She was devastated. She’d worked so hard to get back on track and now another tumor was derailing her plans.

This tumor was in another spot in her brain. She went in for surgery in July, about a week before her junior year was to start. She missed several months of 11th grade and used a wheelchair at home. By the time she got back to school she was walking again.

In her senior year, Bogue Chitto offered band and Spraggins accepted that challenge. It paid off with a full scholarship to Copiah-Lincoln Community College.

She now goes in for checkups every six months.

“I’ve been through a lot and I should be proud of myself because it could have been worse,” she said.

She credits her success to God, her church, her family and the staff at Bogue Chitto Attendance Center. She said she couldn’t do it without her Addison family — Solomon Sr. and Nikkia Addison, Mary and J.T. Addison, and Patrick, Bruce, Glen and Sheree Addison.

“Like my mom says, “It takes a village to raise a child,’ and that’s what helps me continue my life and not give up,” she said.

She still gets headaches if she pushes herself too hard, but she is determined to not let the threat of another bad diagnosis slow her down. And she wants to be an inspiration to others.

“My sister, my brother, I’m a big inspiration to them,” she said.

Spraggins wants to become a medical lab technician and get a job in Lincoln County so she can be home to help her family.

“And I’m going to save some money up so I can build a house, at least put some money down, to build a house for my mom,” she said. “And then, if I get any extra, I’m probably putting it on my sibling’s college fund.”