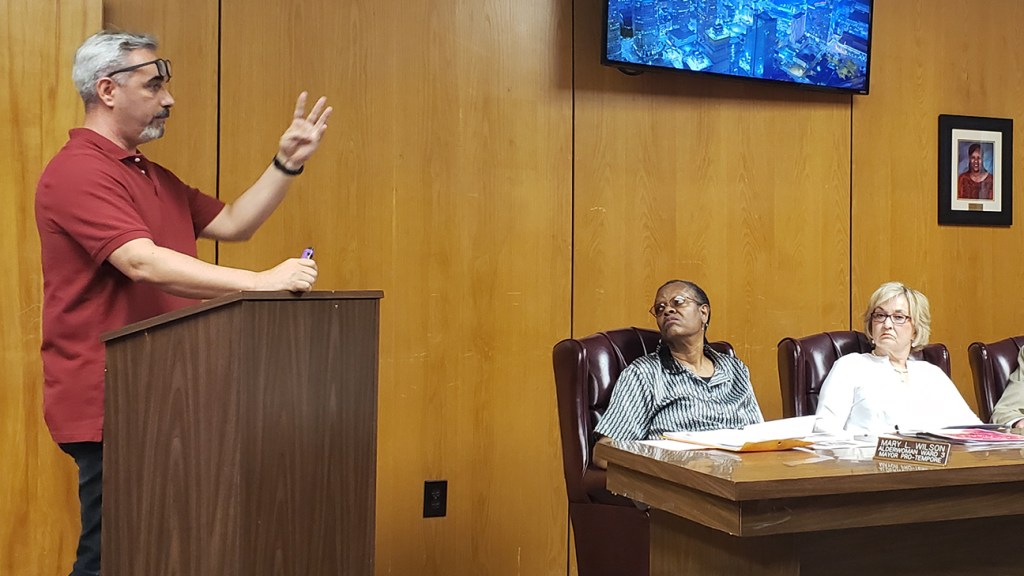 Photo by Donna Campbell Bill Wikstrom of Vaporized, joined by the owners of Brookhaven Vapery, addressed the Brookhaven Board of Aldermen Tuesday night to request an exemption to the ordinance they’d passed a few weeks earlier.

The city’s newest smoking ordinance became official Wednesday, with one change since aldermen passed it 30 days ago — vapers will be allowed to vape in vaping shops.

Bill Wikstrom of Vaporized, joined by the owners of Brookhaven Vapery, addressed the Brookhaven Board of Aldermen Tuesday night to request an exemption to the ordinance they’d passed a few weeks earlier.

The board voted unanimously 4-0 April 22 to approve a comprehensive ordinance covering workplaces and public places in the city and to vacate the previous ordinance. Ward 2 Alderman Shannon Moore, Ward 3 Alderwoman Mary Wilson and Ward 5 Alderman Fletcher Grice did not attend the special-called meeting.

Several big changes to the previous ordinance include no smoking in hotel and motel rooms, private clubs and parks within the city limits and a limit on how close smoking is allowed within the entrance to a public building. It also made it illegal in Brookhaven to smoke in a tobacco shop or vape in a vaping shop and takes away a business’s right to opt out of the ordinance.

The ordinance does not affect those who chew tobacco or dip snuff.

The board took Wikstrom’s comments under advisement and discussed it further in executive session. After the closed-door meeting, which Mayor Joe Cox said was necessary since the discussion included potential litigation, the board voted 4-1 to allow vaping in the two shops already in business in Brookhaven as well as any future vape shops that may open. Alderwoman-at-Large Karen Sullivan was the lone “no” vote and Ward 3 Alderwoman Mary Wilson had already left the meeting before the vote was taken.

Earlier in the meeting, Wikstrom showed aldermen a vaping device and explained that it was not combustible tobacco.

“Vaping is not smoking. I truly believe that the city council has been misled by propaganda concerning the truth about vaping and is making a terrible economic decision based on false information,” he said.

Once a two-pack-a-day smoker, Wikstrom said vaping is a technology that can be used to help people stop smoking. His customers like to sample various flavors of vape — with names like Banana Runts Candy, Trix Cereal and Apple Cake Batter — prior to purchasing and with the ordinance as written, that would be illegal.

Wikstrom said his shop collected nearly $32,000 in taxes for Brookhaven, 13 times the amount of the $2,500 grant the city can get for being a “healthy city.”

“By enacting this ban, inside the place, you are destroying a business that is focused on tobacco-harm reduction, putting people out of work, losing tax revenues, crushing my American dream to own my own business and finally, condemning smokers to a grizzly death that their families get to watch and have a lasting memory of. And that’s where I stand on this,” he said.

Sullivan wouldn’t give in to his plea, saying she often bought items she didn’t taste until she got them home.

“You can’t smoke in a cigarette store so why should you vape in a vaping store?”

She said the city is not hurting Wikstrom’s business because his customers should buy the product and take it home and vape in private.