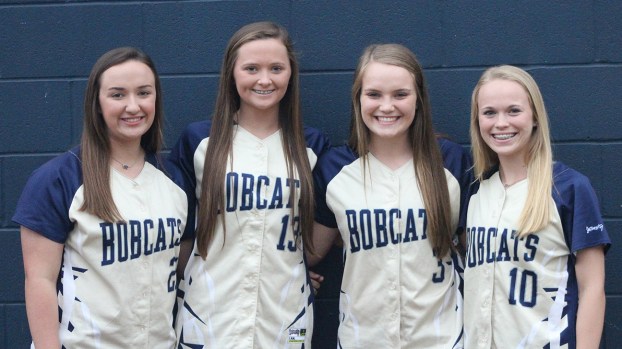 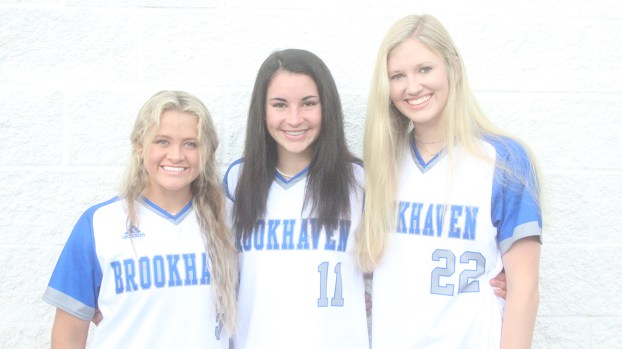 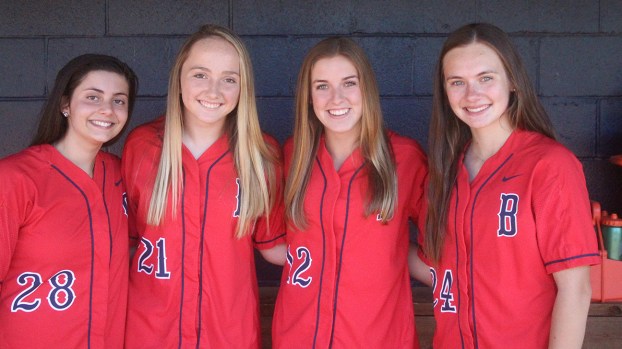 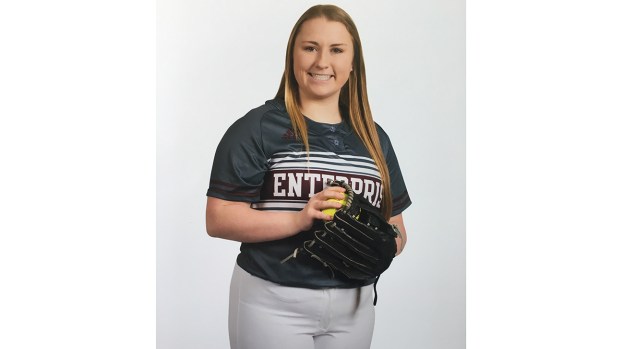 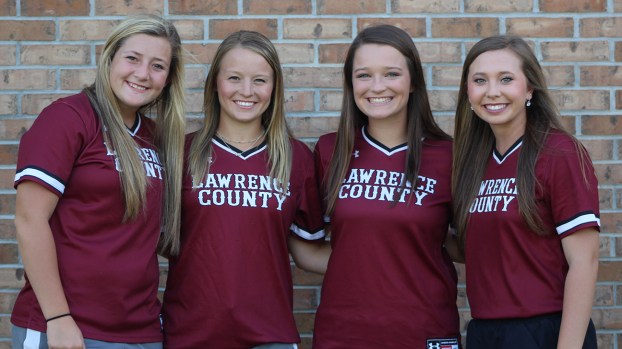 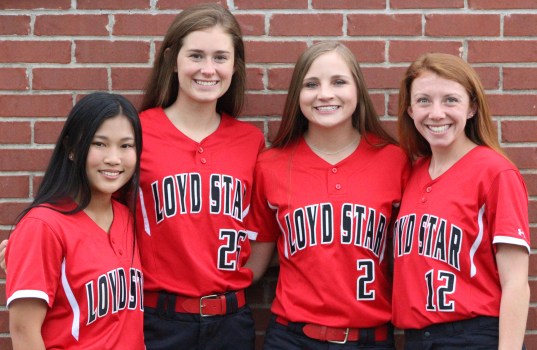 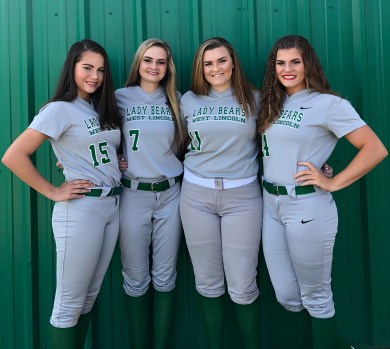 “Playing with my girls that I’ve grown up with is always fun. I like to work hard and try to have fun doing that. It’s always fun to achieve your goals that you’ve set.”
Bonds on having fun while playing softball.

“Always be ready. Be confident in yourself and expect the ball to always be hit to you and read it off the bat. You’ve got to pay attention on every pitch.”

Cade on what it takes to play center field.

“We’ve got a big senior class next year and we want to go as far as we can in the playoffs as we move down to 2A. We had a good year this year, but we want to go farther.”

Crapps on her goals for the 2020 season.

20-4 in the circle with 85 strikeouts as the ace of the Lady Cobra staff. Also strong at the plate where she hit 10 doubles and two home runs. Drove in 29 RBIs for coach Michelle Nunnery.

“You’ve got to judge bad throws and be able to dig them out if they’re thrown low or jump if they’re high. I can rely on my teammates to make good throws almost every time though.”

Crow on the challenges of playing first base.

.500 average with 30 RBIs and 28 runs scored. Hit five doubles and three triples while being an active defensive presence at first base.

“I’d been in a slump and right when we needed it I started hitting it well.”

Felder on her two-home run, five RBI game in an 8-7 win over Clinton Christian in the south state title series.

“We’ve always been taught by Coach Delaughter that you play like you practice, so if you’re always hustling then when a big moment comes in a game, you’ll be going all out.”

Floyd on the importance of hustling in practice.

“I just got up there and hit it this year. I didn’t overthink it and I tried not to get under the ball and stay relaxed.”

Foster on improving her batting production as a junior.

“I spent more time in the cage with Coach Smith and we worked a lot on the tee. I had trouble hitting inside pitches early, but it finally clicked towards the end of the season.”

Frazier on raising her batting average over .150 points this season.

.489 average with 36 RBIs for the Lady Bobcats. Scored 18 runs while hitting eight doubles and three home runs. Started at third and made 12 pitching appearances. Finished 6-3 with 38 strikeouts in 44 innings.

“For me there is a game inside the game. I focus on winning each pitch. You’ll either win it or los it and then it’s on to the next one. You can’t let anything effect you.”

Harris on staying focused and mentally engaged as a pitcher…

.500 average with 18 RBIs. Scored nine runs while hitting eight doubles, two triples and one homerun. Pitched all but two innings the entire season. Struck out 61 and walked 72 in 84.1 innings of action for coach Trace Abudl-Hadi.

“I’ve got some pitches that I want to improve my delivery of before next season. At the plate I want to work on being able to pull a ball.”

Hughey on what she wants to work on this offseason.

“Being able to be part of every play, that’s what I enjoy the most.”

Jackson on her favorite thing about playing catcher

.443 average with 25 RBIs. Scored 39 runs and hit nine doubles. Had a .994 fielding percentage as a catcher. A 2018 MAC All-Star game participant and Copiah-Lincoln signee.

“Being somebody that everyone can look up to. Always giving your best and working hard every chance you get.”

Leake on what being a leader means to her.

.495 average with 37 runs scored. Hit four doubles, one triple, and drove in 37 runs. Solid defensively as a shortstop, had a .931 fielding percentage. A 2018 MAC All-Star game participant and Copiah-Lincoln signee.

“I’ve always been fast since I was a little kid but doing speed training with Mark Cornwell at KDMC has improved my quickness.”

Maxwell on improving her speed and quickness.

.582 average with 52 runs scored. Hit five doubles and two triples while driving in 16 runs. The fastest player in the area, not much gets past her at shortstop. Stole 16 bases. 2019 MAC All-Star game selection.

“Coach always tells me to reach down and pick the ball up like I’m picking a flower. To charge in on the ball and be confident. It’s something we work hard on and I’ve improved at.”
Mcsweyn on defending the bunt as a third baseman.

.425 average with four doubles and one triple. Drove in 20 RBIs and scored 22 runs while playing third and batting in the five-hole for the Lady Cobras.

“Being patient, looking for a pitch to drive, knowing that you have a job to do and that you can’t just step into the box and flail at the first thing you see.”

Miller on being effective as a leadoff hitter.

“I’ve had to learn to contain my body language, my demeanor, and my attitude. My teammates, the umpires, and the fans are all watching how you handle yourself.”

Nations on the biggest lesson learned as a first-year pitcher.

one triple. Struck out 51 in 117 innings pitched as a first-year starter in the circle for the Lady Panthers.

“Attitude is everything. It’s important to be 100 percent with each other and to build each other up. Your younger teammates are going to be watching you and following your lead.”

Newman on what it means to be a good teammate.

Batted .377 with three doubles and a triple for the Lady Bears. Drove in 11 runs as the leadoff batter and did not make an error as a centerfielder while also stealing a team high eight bases. Scored a team high 24 runs for coach Andrew Redd.

“You’ve got to be dedicated. I found a good pitching coach and committed to lessons once a week. He helped me improve my pitches. You can’t just expect to win without putting in the work.

Paden on what it takes to be a starting high school pitcher.

Paden on how she most wants to improve next season.

“You’ve got to figure out what your weakness is and work on it until it’s your strongpoint. The more reps you can take, the more groundballs that you can field — the better you’ll be.”

Pevey on how to improve defensively as a shortstop.

.480 average with 26 RBIs and 25 runs scored for the Lady Cougars. Smacked nine doubles, three home runs, and two triples. Turned one double play and had a .920 fielding percentage as a shortstop. A 2019 MAC All-Star game selection.

“A tough, competitive team that always fights till the seventh inning, regardless of the score. A program that fights until the end and doesn’t back down.”

Poole on the culture of Lady Hornet softball.

.376 average with 37 runs scored. Drove in 27 runs while hitting four doubles and three home runs. Only struck out two times and had an .879 fielding percentage as a shortstop. A 2018 MAC All-Star game participant.

“I want to be mentally stronger next year. In the past when I’ve made a mistake I would hang my head, I want to get past that as a senior and be locked in.”

Ready on where she wants to improve as a senior next season.

“Work at it every day. Practice and don’t stop.”

Richardson on what younger players can do to improve their arm strength.

.491 average, 68 RBIs, 19 doubles, 16 home runs. Hit one triple and scored 54 runs. Drew 25 walks and only struck out seven times. Had a 1.086 slugging percentage. Strong armed as a shortstop, had a .920 fielding percentage, and turned three double plays. MAIS AA All-State.

“Pitching, I like being such an important part of the game. I like the feeling of striking people out.”

Smith on what position she most prefers.

“You’ve got a lot of responsibility as a catcher. A lot of its mental, you’ve got to stay focused because you’re leading the defense.”

Speights on what goes through a catcher’s head.

.455 average with 22 RBIs. Hit seven doubles and one triple while drawing 15 walks. .991 fielding percentage as a gritty presence behind the plate catching.

Stephens on when the softball bug bit her hardest.

.417 average with 27 RBIs and 14 runs scores. Hit eight doubles, three triples, and one home run for the Lady Cougars as a cleanup hitter.

Summerall on what she likes and dislikes about playing catcher.

.345 average with 18 RBIs and 14 runs scored for the Lady Bears. Hit three doubles, one triple, and one home run. Had a .978 fielding percentage while only committing two errors and had four passed balls in 96 innings caught.

“Haley Nations no-hitting Pearl River Central in the second round of the playoffs my junior year and starting the season 17-0 when I was in eighth grade.”

Wallace on her favorite moments of her career. A varsity player since seventh grade, she started 171 games at shortstop.

“It means playing with your family because you’re with them every day. It’s working hard every day because you know there is a tradition of winning here that you want to live up to.”
Wallace on what Lady Bobcat softball means to her.

.500 average with 40 runs scored as a leadoff batter. Hit one double and 16 RBIs while only striking out four times. Had a .960 fielding percentage as a speedy right fielder for coach Kris Smith.

“I started catching when I was a little older, I think I was 13 or 14 when I moved behind the plate from third. I love it now and it’s second nature to me. When the season starts it takes my knees a couple games to get adjusted, but after that I never have any problems.”

Wilson on the physical demands of playing catcher.

.273 average with 10 doubles and 28 RBIs for the Lady Cobras. Smacked one home run for coach Michelle Nunnery. A 2019 MAC All-Star game selection.