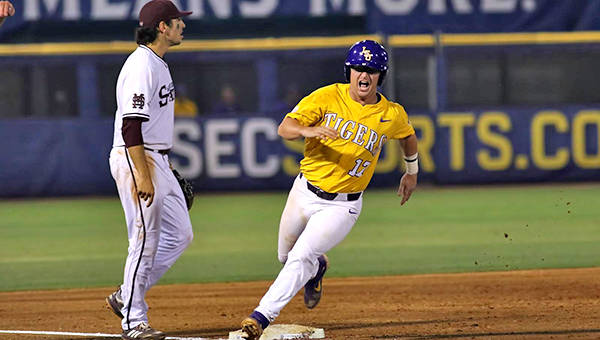 HOOVER, Ala. (AP) — This time, LSU and Mississippi State wrapped up their business in seven innings instead of 17.

The game was called after seven innings under the 10-run mercy rule. The Tigers (37-23), who lost a 17-inning game against the Bulldogs (46-13) two nights earlier, will face top-seeded Vanderbilt in Saturday’s semifinals at 3:30 p.m.

Ole Miss plays Georgia in the other semifinal at noon.

LSU had five runs in the third inning and seven in the fourth, with eight players driving in runs during that explosion.

“The third inning we got a couple of big hits, and I think that loosened everybody up,” LSU coach Paul Mainieri said. “After that, we just got a lot big hits and got a big enough lead, and as long as we threw strikes we had a chance to hold them down. I’m glad we only played seven innings. Every inning we can save our pitching helps.”

LSU is seeking its 13th conference tournament championship, and seventh in 12 years. More importantly, this deep run might have put the Tigers back in position to host a regional in the NCAA Tournament.

“This tournament always seems to bring out the best in us,” Mainieri said. “I’m very proud of our team. We now have 21 wins against RPI Top 50 teams, and hopefully this give us an opportunity to be a host for an NCAA Regional.”

Mississippi State has lost 13 of its last 16 games against LSU and was eliminated from the tournament. It did not have an extra base hit for just the fifth time in 59 games, and had only six hits total.

Despite the loss, the Bulldogs are still likely to receive a top-eight national seed when those are awarded on Sunday. The Bulldogs were fourth in the NCAA’s RPI rankings entering Friday’s game.

The 16 regional sites for the NCAA Tournament will be announced Sunday at 7:30 p.m. The rest of the 64-team bracket will be unveiled at 11 a.m. Monday on ESPNU.

The top eight national seeds will also host super regionals if they make it that far.

After winning 13 of their previous 15 games coming into the SEC Tournament, the Bulldogs went 1-2 in Hoover.

“You don’t want to lose by 10, just a tough night. We didn’t have things go our way,” Mississippi State coach Chris Lemonis said. “We could have made a couple plays, made a couple pitches or had some better at-bats in some innings to keep it going. We just have to reboot. We’ll travel back to Starkville and get ready to host a regional.”

Brandt Broussard and Zach Watson both had RBI doubles for LSU, which struck out four times and did not have a baserunner in the first two innings against Mississippi State starter J.T. Ginn.

Reid broke that up with a leadoff single in the third inning, and Broussard drove him in with a double two batters later for the game’s first run.

“The first six at-bats we had tonight were about as non-competitive at-bats as you could have and (Ginn) just went right through us the first two innings; we couldn’t even get a sniff and it looked like they were going to just dominate us,” Mainieri said.

As it turned out, Ginn didn’t make it out of the third inning. He allowed two more hits and two walks before giving way to Tyler Spring, with the Bulldogs down 4-0.

By the end of the fourth inning the Bulldogs trailed 12-2 and were on their fifth pitcher.

“(Ginn) was really sharp early. He left some balls up and then they just got some momentum going against him,” Lemonis said. “He’s been really good for us, and I’m sure he’ll be really good next weekend.”