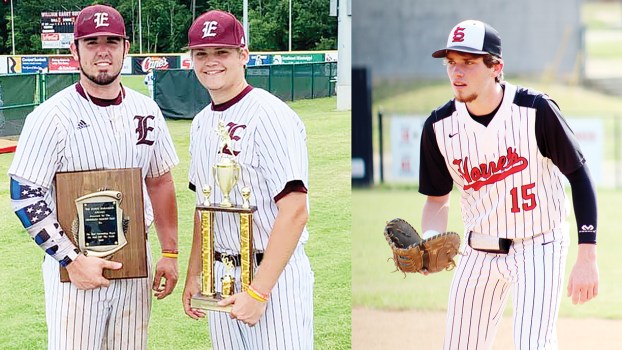 Photo submitted/Daily Leader file photo Hunter Richardson and Landon Gartman of Enterprise and Dylan Case of Loyd Star played in the MAC All-Stars game for the South team. Richardson, Gartman and Case were part of a 6-4 South victory.

Hunter Richardson and Landon Gartman of Enterprise represented their school one final time Saturday as they took part in the Mississippi Association of Coaches All-Star game in Hattiesburg. The D.M. Howie Crossroads Diamond Club All-Star Game was held for the 45th time and played at Milton Wheeler Field on the campus of William Carey University. Richardson was selected to receive the sportsmanship award in the 1A/2A game. Gartman pitched three innings and struck out eight to earn the defensive most valuable player award. Dylan Case of Loyd Star also played in the game for the South team. Case pitched an inning of relief and had an RBI sacrifice fly that tied the game up. Richardson, Gartman and Case were part of a 6-4 South victory.

Regarding James Beard: In praise of the quiet one

I once knew a young man who played basketball on a team that I was the assistant coach for. He wasn’t... read more