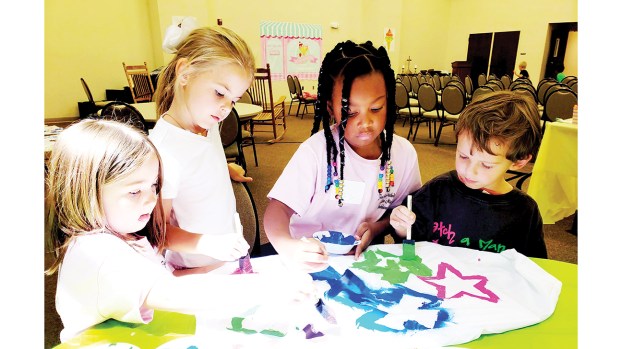 The young artists’ lines may be uneven on the fabric, but their hearts are true. They wanted to make something during First United Methodist Church Brookhaven’s vacation Bible School that made someone happy.

The pillowcases — when dry — will go to case workers in Lincoln County who have the difficult task of transferring children from one home to another.

“Our foster children come from a variety of backgrounds and their removal from their homes is a terribly traumatic situation at best,” said Lea Anne Brandon, director of communications for the Department of Child Protection Services. “Even when we can prepare them for it a little in advance, they’re still leaving their parents, they’re leaving everything there that’s familiar to them and that they call home. So anything like this that we can do to nurture them and give to them a sense of security is such a blessing.”

The project was suggested by a church member who works with the agency and knows how treasured the pillowcases will become.

“If a caseworker is going to pick up a child to take them to a foster home, they can put them (the cases) in the car and have them there for the child and let them know they’ve got something to hold on to that’s theirs,” Brandon said. “Everything else may be taken out of their little arms, but this is theirs.”

Making the pillowcases for children wasn’t the only project aimed at sharing kindness campers worked on this week, said Wanda Ballard, the children’s ministry coordinator for FUMC.

The children — about 70 each day in third through sixth grades — along with a dozen or so youth, worked on mission projects each day as part of their VBS activities.

Monday, they made friendship bracelets that will be taken to Honduras at Christmas by Brookhaven photographer Jennifer Calhoun and her family. The children were photographed wearing a bracelet and created another bracelet for a child in Honduras who will hopefully do the same and send their photos back.

Tuesday, they learned how important it is to let veterans know their service and sacrifice to their country is appreciated so they made cards to be delivered to various Veterans Administration hospitals and nursing homes across the state.

Wednesday, they watched a video introducing Karli, a new “Sesame Street” character who is a young Muppet in foster care, before painting pillowcases for Lincoln County children who are also in foster care.

Today, they’re getting a visit from shelter dogs from Brookhaven Animal Rescue League and they’ll be giving away pet treats and toys they collected.

The mission projects are an important part of the annual summer VBS at FUMC.

The Public Service Commission and Secretary of State’s Office will soon have a new tool to help them fight scammers... read more