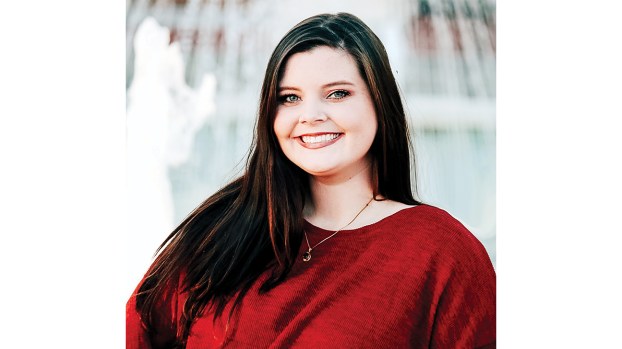 Lauryn Bracey, avid reader, never fails to have a book in her hand.

Bracey, 21, is from Union Church and has lived there for a majority of her life. She is the daughter of Kevin and Felisha Bracey and has twin brothers — Parker and Taylor, 18.

She is a 2016 graduate of Loyd Star Attendance Center where she played flute and piccolo in the Loyd Star Hornet Band. After high school, she continued playing flute at Copiah-Lincoln Community College.

Graduating from Co-Lin in December 2017, she transferred to the University of Southern Mississippi, where she is majoring in kinesiology.

Bracey has lived in Hattiesburg for a year and a half, and she has worked at the Southern Miss accounts payable and travel office for much of that time.

When school or work isn’t occupying her time, she enjoys embroidery, crafting and hanging out with her best pals.

Her favorite TV shows are “SpongeBob Square-Pants” and “Desperate Housewives.”

One food that stands out above the rest for her is her father’s chicken and dumplings because he makes his dumplings from scratch.

“They’re a lot better than the pre-frozen ones that people usually buy from the grocery store,” Bracey said.

Some people like to keep secrets about themselves, but Bracey isn’t one of them. She said there isn’t anything people don’t know about her.

One of her favorite things is her cat, Evelynn. She can’t go without her phone or a book on hand. She often reads two or three books at a time, at different paces. She has read an entire book in a day before, and even finished six books in a week.

Bracey considers her best quality to be her confidence, because with that she can do or be anything she wants, she said.

In five years, she sees herself with KT behind her name, working as a certified kinesio-therapist. Her biggest life goal is to live a long and happy life.

The Brookhaven-Lincoln County Chamber of Commerce hosted a member appreciation picnic Thursday afternoon for members and their families as well... read more