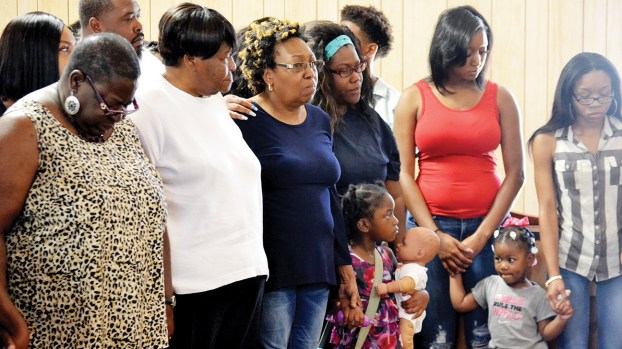 Photo by Donna Campbell Ophelia Allen, in blue, holds the hand of her granddaughter, 5-year-old Quanyia, Friday at a prayer vigil for the young girl’s brother, Quantavious “Yang Yang” Allen Jr. The boy died Wednesday night after someone fired into their Grant Road home while the two children were playing. He died later that night.

Victim’s grandmother: ‘It’s got to stop’

A woman grieving the tragic death of her grandson is begging for the violence to stop.

Quantavious, known in the Brignall community as Yang Yang, was a gentle soul who rode his bike in the neighborhood, walked his dog and doted on his younger sister. He was respectful to his elders and believed in Jesus, said the Rev. Shelby Mitchell of New Jerusalem Church. The church is two blocks from Yang Yang’s house and the boy would visit the pastor almost every day, he said.

About 50 people gathered Friday at New Jerusalem to pray and seek solace in solidarity at a prayer vigil organized by Rev. Phillip Sterling.

Sterling is urging the community to come forward with information that can help police bring justice for a 7-year-old boy who died too soon.

“What happened the other night could have happened on any street, any road, anywhere,” he said. “All the prayer vigils in the world is not going to stop it. All the marches will not stop it. We know the answer and we have the answer. The question is, are we willing and bold enough to do what is really required for an end to come to some of the violence that is going on, not only here, but all around us?

Women stood on both sides of Allen, hugging her during the service.

“They don’t know how much they took from me. He was my heartbeat,” she said.

Allen said Quantavious knew Jesus. She’d told him about heaven and explained how family members who had died were watching over their family. She prayed with him at night.

She had a break from her job at King’s Daughters Medical Center last weekend and Yang Yang came to her with a serious look on his face.

She told him she was old and he had to take care of her so it would be a while.

“But Nana, he told me that three times,” he responded. “For him to say that to me, now I look back, I wish I’d asked questions like, ‘What did you say?’ ‘How did you feel about it?’”

Allen was at work Wednesday afternoon about 6 p.m. when someone fired multiple times at their home.

Yang was in the living room, likely playing his favorite video game, “Fortnite,” she said. His 5-year-old sister, Quanyia, was in her bedroom playing, Quantavious Allen Sr. was in his mother’s room watching television.

Allen said her son heard a “tsss, tsss, tsss” sound on the bricks of their house.

“He didn’t know what it was, but he told the kids to get down, to get on the floor. Quanyia said she was on her bed and she dove down,” she said. “Yang, evidently he was going to his daddy’s voice, you know, and when he was saying get down, he was walking to him, and I guess it got him then. She told me he came into the hallway and Daddy said, ‘Baby, you alright? You alright? And he said, ‘Daddy, I think I’m hit.”

“She said that was the last words he said,” Allen said through tears. “She said he didn’t talk anymore.”

The young boy was taken to KDMC by private vehicle and then flown to University of Mississippi Medical Center in Jackson. He died shortly before 10 p.m.

Police are continuing to canvas the neighborhood in the Brignall community, hoping for a break in the case. So far, no one has been arrested.

Police Chief Kenneth Collins said Friday while going door-to-door in Brignall that they were going to solve this case. He promises he will find the person responsible for killing Yang Yang.

The school superintendent in Lawrence County hopes parents will take advantage of an opportunity for their children to get help... read more