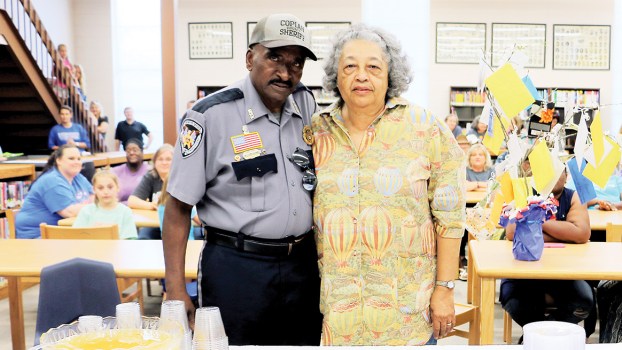 Photo submitted William Brown and his wife Delois are pictured at his retirement party. Brown retired after more than 20 years as security officer of the school.

William Brown fell so hard for a young Mississippi woman he met on the East Coast that he brought her back to Copiah County to ask her parents for her hand.

“She told me I couldn’t marry her unless I brought her to Hazlehurst and met her mama and daddy,” he said. “And I was so much in love with her, I’m telling you the truth, I didn’t want to lose her. I was henpecked.”

They’ve been married 51 years and Brown recently retired as security officer for the Wesson Attendance Center so they can spend more time together. Of course, the crappie, bream and butterbeans better watch out because tending to his garden and fishing are also on his list.

The 79-year-old said the time was right to retire.

“There were things I wanted to do for myself before I leave this world,” he said.

Brown was the first black police officer for the Town of Wesson. He was hired by former-Police Chief Steven Carlisle, who said Brown was an all-around good guy.

“He loves kids. He loves old people. He just loves everybody around here,” he said.

Brown was born in Clayton, Louisiana, but grew up in Santa Monica, California. He earned his diploma Havre de Grace, Maryland, and was working in maintenance in Santa Monica when he found the actor William Holden dead in one of the high-rise apartments.

Holden, who starred in “Bridge on the River Kwai” and “Sunset Blvd” and served as best man at the wedding of Ronald and Nancy Reagan, had fallen and hit his head on a table. The actor bled to death, Brown said.

It wasn’t long after that traumatic experience that Brown moved to his wife’s home state and took a job with the Wesson Police Department. Then he became the chief deputy at the Copiah County Sheriff’s Office. As the undersheriff, he worked at Wesson Attendance Center ball games and special events. When Harold Jones was elected sheriff, Brown joined Wesson schools as a full-time security officer.

Brown loved working with the children, keeping them safe.

“If you don’t care nothing for the kids, you don’t need to be at the school,” he said.

“He will never be replaced in the hearts of our faculty and staff, students and community,” she said. “We were blessed to have him, and it’s hard to imagine starting a new year without him directing our traffic. He loved our students and they love him.”

Brown said he enjoyed their smiles in the mornings, and their even bigger smiles in the afternoon. Many of the children through the years turned to Brown for grandfatherly advice.

“They’d come and talk to me,” he said. “I solved a lot of problems for the kids. Some of them wanted to quit school.”

With retirement comes more free time with Delois and their two grown children —Renee and William Jr. and their grandson, William III.

He is active as a deacon at Union Grove Baptist Church and he serves seven churches in the area Baptist community as president of their Sunday School Institute.

He is a past president of the Wesson Lions Club.