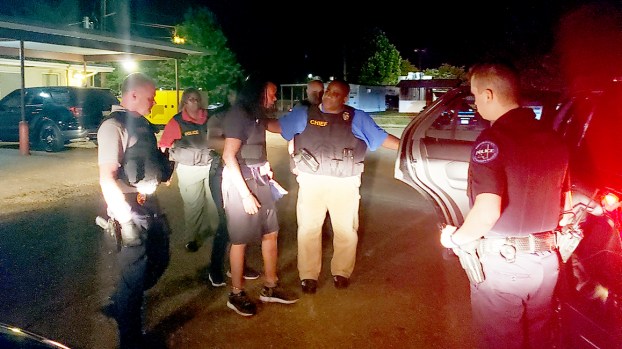 Suspect in 7-year-old’s death in custody

A man accused of killing a 7-year-old boy in a drive-by shooting in Brignall June 12 was captured Friday in Wesson by U.S. Marshals.

Weathersby, 24, was taken into custody on Sylvarena Road about 6:30 p.m. Collins expects he will be charged with murder in the fatal shooting of Quantavious Allen Jr.

“I want to thank the U.S. Marshal Service, the Lincoln County Sheriff’s Department and all the officers of the Brookhaven Police Department who worked non-stop, almost 24 hours a day,” he said.

He also thanks the Brignall community for offering information that allowed Weathersby to be apprehended by law enforcement.

“I want to give my great appreciation to the Brignall community for standing up in this time and helping us with all of their participation. I pray that God gives everyone peace.”

Collins, who grew up in the Brignall community, said he offers his love to all of the families affected by this tragedy.

“I give my love and prayers to both sides because I know they’re all going through something at this time. They’re both hurting,” he said.

Police began their search for Weathersby June 14 after investigators developed leads by going door to door in Brignall. On Monday, they released images of the suspect and called on the public’s help to locate him.

Allen, 7, was playing video games in this grandmother’s house on Grant Road last week when he was hit by a 7.62 caliber round from an AK 47, Collins said. His father and 5-year-old sister, Quanyia, were also in the house that afternoon. No one else was injured. The grandmother, Ophelia Allen, had already left for her night shift job at King’s Daughters Medical Center.

Collins said Weathersby had a grudge against Allen Sr., who’d just gotten home from work with his job in the public works department for the city. While Collins doesn’t think Weathersby intended to kill a child, he still is accused of spraying the house with 10 rounds from an assault rifle.

Marie Delatte woke with a start Thursday morning and noticed her ceiling fan wobbling — but not the tree poking... read more