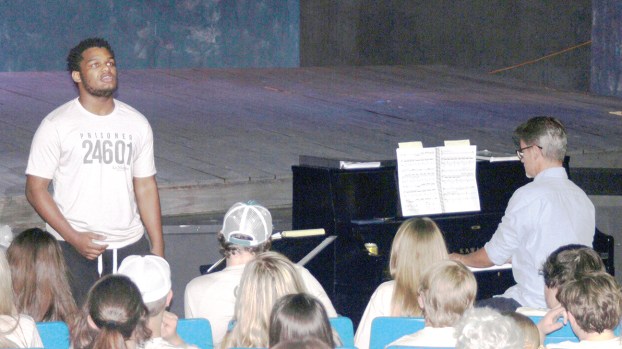 The Brookhaven Little Theatre held a “Les Misérables: Student Edition” Sneak Peek event recently at The Haven that allowed a behind-the-scenes interaction with the director and cast.

“I love how we brought the community in to get a sneak peek and I love all the support that everyone has brought. It’s just so amazing,” Walton said.

This was the first sneak peek event to be held by BLT. The audience engaged in a Q&A session Saturday and previewed some solo performances by the student cast.

MaryRhea Waterloo, of Brookhaven, a junior at Mississippi School of the Arts, has been a part of the theater for years. Her mother, Emily Waterloo, is BLT’s artistic director and executive director. Her father and younger sister are also heavily involved in theater.

“It was so fun because I feel like we just brought the community onto the stage and everybody is getting a little taste of what we’re gonna do,” she said.

Director Randy Redd is a Brookhaven native who moved to New York 20-plus years ago and has since been involved in working on and off-Broadway, national tours, films, TV shows, commercials, voiceovers, writing and directing.

“I am completely overwhelmed by how far this theater has come,” Redd said. “It is becoming a real destination for a lot of people, and I’m really proud that there is something so great in the little town that I grew up in.”

The musical drama is a modern classic base on Victor Hugo’s novel and features a memorable score. Parental guidance is encouraged for the school edition of the musical.

Performances of “Les Misérables: School Edition” are Thursday through Saturday at 7:30 p.m. with matinée shows Saturday and Sunday at 2 p.m. All seats are $20.