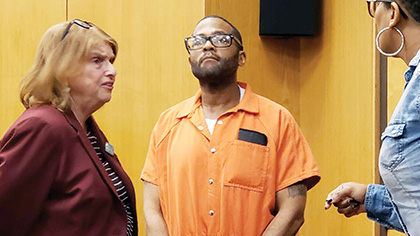 Daily Leader file photo Cory Godbolt will be back in court Wednesday morning to ask the judge to exclude evidence.

Godbolt back in court Wednesday morning

Willie Cory Godbolt, a Bogue Chitto man accused of killing eight people during a seven-hour rampage in May 2017, will be in court today to ask a judge to exclude evidence from his capital murder trial including everything the defendant said to law enforcement officers during his arrest.

Godbolt, 37, is charged with four counts of capital murder, four counts of first-degree murder, attempted murder, two counts of kidnapping and armed robbery related to the shooting deaths of deputy William Durr, 36; Barbara Mitchell, 55, her daughter, Tocarra May, 35, and Mitchell’s sister Brenda May, 53, all of Bogue Chitto; Austin Edwards, 11, and his cousin, Jordan Blackwell, 18, of Brookhaven; and Ferral Burage, 45, and Sheila Burage, 46, of Brookhaven.

The eight victims were shot to death between the night of May 27 and the morning of May 28 at three locations — Lee Drive, Coopertown Road and East Lincoln Road. Godbolt was arrested by law enforcement near Super Jack’s at East Lincoln Road and Hwy. 84 as he was walking away from the East Lincoln home, authorities said.

Court documents detailing the charges against Godbolt state he knew Durr was a law enforcement officer when he killed him.

Defense attorney Alison Steiner is representing Godbolt at the 9 a.m. motion hearing before Lincoln County Circuit Judge David Strong. The hearing is also set for Thursday at 9 a.m. as well but Strong doesn’t anticipate it will take both days.

• Motions for supplementing discovery: Includes materials that have been destroyed or have not yet been introduced that are relevant to the suppression motion hearings.

• Motion to suppress evidence: Includes searches and seizures Godbolt’s car, home, cell phones and cell provider data as well as any other things or places “arguably within Mr. Godbolt’s expectation of privacy that were searched and seized from other places and things.”

• Motion to suppress statements: Includes everything Godbolt said in the presence of law enforcement officers during his arrest and detention on East Lincoln Road; during his ambulance ride to University of Mississippi Medical Center May 28, 2017; during his hospitalization and treatment at UMMC and his transport from there to Copiah County; and while in detention at the Copiah County Jail on May 30 to MBI agents and June during a jail-initiated mental health screening.

A DeSoto County  jury will be bussed to either Lincoln County or Pike County to hear the case in February. Strong ordered the trial be held in Lincoln County in the circuit courtroom upstairs at the Brookhaven-Lincoln County Government Complex unless he decided it should be moved to Pike County’s courthouse due to limited seating available in Brookhaven.