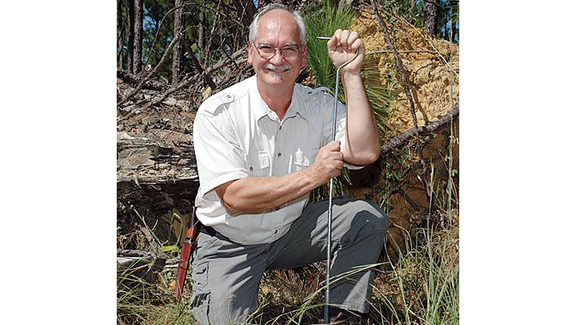 The Snake Man is coming to the Lincoln County Public Library today and he’s bringing his reptile friends.

Herpetologist Terry Vandeventer, of Jackson, will present his Living Reptile Museum to children and adults at the library today at 10 a.m. and 2 p.m. The program is free.

“The kids all love him,” she said. “I think a lot of people are intrigued by snakes. They learn something about all the different snakes they can find in their backyard and they’re just in awe of him.”

And their parents and guardians?

Vandeventer’s interest in wildlife began when he was just 4 years old with frogs and garter snakes from his backyard. Since then he has come to be recognized as an international expert on reptiles. He has appeared before audiences for more than 30 years including several visits to Lincoln County.

Aside from his duties as owner of the Living Reptile Museum, he regularly lectures across the United States and in several foreign countries. A popular personality on television and radio call-in shows, Vandeventer is also the author of numerous scientific and popular publications on snakes. Formerly in charge of the Jackson Zoo Reptile Department, he now serves as herpetology field associate with the Mississippi Museum of Natural Science.

The search for rare reptiles has taken Vandeventer to many exotic locations, including the Peruvian Amazon Rainforest, where for many years he guided scientists and natural history expeditions. His expertise has been utilized on the sets of Hollywood motion picture productions and televised nature documentaries.

Brown encourages visitors to arrive at least 15 minutes before each show.

Community lays a child to rest