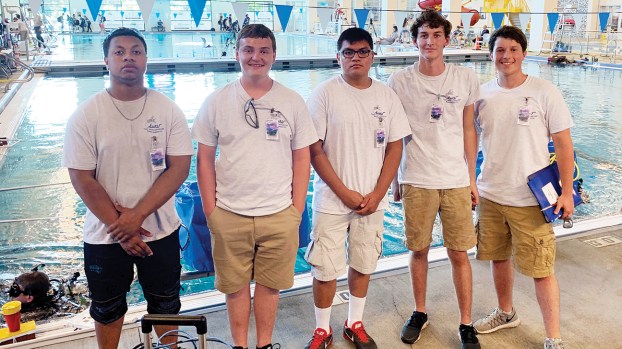 Co-Lin’s robotics team placed 12th out of 71 teams at a recent international competition in eastern Tennessee.

“I think we were nervous going into it, because none of us had been to the competition before,” team captain Jenner McInnis said. “The team performed well under pressure.”

“This is one reason we do this program, so students can show their skills to international businesses,” advisor Kevin McKone said.

Those who traveled to Tennessee were McInnis, Andrew Tanksley, Austin Coleman, Trey Dorsey and Jesus Vasquez-Marcelino, along with advisors McKone and Carey Williamson.

“The project is a collaboration between the academic and the career technical sides of campus,” McKone said. “We wanted them to work together.”

The robot took around eight months to design and build before the competition in June.

For each part of the process of building the robot, there are points that can be earned depending on how well the part is completed. The robot performs eight to 10 missions underwater, such as moving debris away from an engine block or transporting a mooring out into the water.

The missions garner points for completion. The technical report, sales presentation and engineering presentation are graded as well. After everything has been completed, an overall score is given to represent the amount of points earned.

Each completed task can earn points for the team depending on the quality of the work. The robot performs missions by itself and with other robots underwater. The technical report and presentation are judged by industry professionals.

All of this is scored, and at the end each team is given an overall score.

Although the robot ran well, the team had some technical difficulties due to corrosion found on the inner mechanisms. This required troubleshooting during one of their runs of the competition.

“This is part of the learning experience,” McKone said. “Even though they were upset about it, that’s how the real world works.”

The team placed higher than anticipated and even improved from the previous year, where they placed sixteenth out of 28 teams in their category.

“I learned that that coordination is a lot harder than it looks,” McInnis said. “It took a lot of time, but it was a great learning experience.”

The MATE ROV competition uses underwater robots to teach science, technology, engineering and math to students in order to prepare them for technical careers. The competition requires team to see themselves as companies developing a product and to teach them the skills that comes along with that.