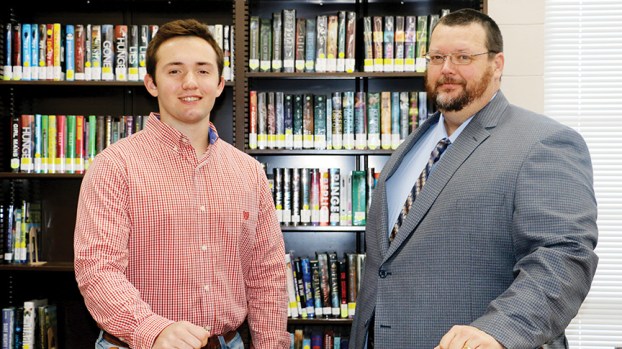 Recent Wesson graduate Will McInnis isn’t perfect. But his ACT score nearly is. With a cumulative score of 34 out of a possible 36, McInnis was named Wesson Attendance Center’s STAR student.

He is the son of Richard and Becky McInnis of Wesson.

McInnis, 17, said he took the test eight times, beginning in ninth grade. He sought tutoring from people who could challenge him and push him to higher levels. Drill practice tests helped, as well. His strategy will work for others too, he said.

“You can’t achieve your best score if you aren’t used to the ACT and you can’t be used to it unless you take it several times.”

“I’ve always been interested in diseases and health, so choosing microbiology allows me to see the many organisms behind so many diseases, and Mississippi State was the best fit for me in the classes they offered for this major,” McInnis said.

Each STAR student is given the opportunity to award a teacher who has strongly influenced them with the STAR teacher designation. McInnis chose his history and ACT prep teacher, Rod Martin.

Martin, also of Wesson, has been teaching 22 years, 15 at WAC. He teaches eighth-grade “U.S. History to 1877” and an ACT prep class that focuses on English and reading. He taught McInnis in both of those classes, and coached him on the academic team.

“I remember him asking us every day in ACT Prep what we had learned the day before — often to no response, but he always asked. Mr. Martin was never afraid to be himself and never shied away from anything. It was a mix of his humor, knowledge and willingness to help that really made me want to choose him. It’s really my honor to be able to choose him.”

It’s not the first time Martin has been selected by a student as STAR teacher. He was also chosen in 2007, 2008 and 2018. Martin was named Teacher of the Year for Wesson four times, as well.

“I set very high expectations for all of my students and for myself, and my academically gifted students are not exceptions. If anything, I am probably harder on them than I am on anyone else,” Martin said.

“Will has told me that I always challenged him to think in different ways and to set loftier and more specific goals for himself — never to be satisfied with anything less than excellence in all things — and Will kept that mindset throughout his academic career with obvious results, and he deserves 100 percent of the accolades he has received for his consistent hard work and success.”

Martin encourages students and parents to keep in mind that the ACT covers a limited number of skills, and that most of these can be gained in English, math and science classes across junior high and high school. The key to doing well on the test is reading quickly and with fluency, he said.

“Because the ACT is a timed test, being able to read quickly and understand what you are reading is of utmost importance on all four sections of the ACT,” said the teacher.

Martin said being chosen as STAR teacher is the highest honor a teacher can receive, because it means one of his students saw something in him that he saw in them — a passion for purpose and excellence.

“I am humbled because Wesson has so many outstanding teachers who deserve recognition, and Will could have justifiably chosen any of them,” he said.

“There is no greater feeling as a teacher than to have a current or former student tell you that you played some role in his or her success.”