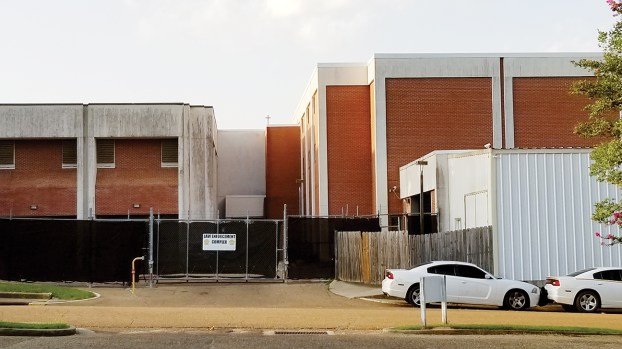 ‘No room for growth’ in county jail

As the number of individuals committing crimes in Lincoln County increases, so does the need for a place to put them.

The Lincoln County Jail — with both new construction and renovations completed in 2000 — has room for 120 inmates. The average number of inmates per day was 96 in June, though it hit 106 one day, Lincoln County Sheriff Steve Rushing told supervisors this week. As a department head, it was Rushing’s turn to bring the board up to speed on the duties of his job and the conversation came to a halt when he mentioned the jail.

Rushing said a new jail isn’t an immediate need, but it’s something to “put on the back burner” and bring up again in a few years.

“If you keep at the rate we’re going now, for the past two years we’ve steadily been hitting that 100-bed mark every other month, every couple of months, in four or five years, y’all are going to have to be seriously trying to figure out what to do with them,” he said.

The “new” jail was completed in June 2000, then renovations began on the jail that was already in use. That work was completed that same year. The project cost about $3.5 million.

Before the addition, the old jail — with a capacity to hold 32 inmates — regularly housed as many as 87, according to The Daily Leader archives.

A growing population of inmates has been females, Rushing said. They house a dozen or more females at a time.

“That’s been the biggest increase we’ve seen on the jail side,” he said.

The older jail was renovated to have room for 10 female beds. It also houses maximum security male inmates in another section.

“There’s no room down on that end,” Rushing said. “You might could add some. We’ve actually slid some bunks (for females) into what we call the day room.”

The problem with that is having more beds than allowed based on the number of bathroom facilities available, he said.

Sometimes jailers are forced to turn away deputies, troopers and police officers with females arrested on weekends on misdemeanor charges because they only have room for felony arrests.

“If somebody is coming in with a misdemeanor charge we’re pretty much turning them right back out as soon as they walk in the door because we’ve got no bed for them,” he said.

Falvey doesn’t want to wait until there’s no room to start planning for a bigger jail.

“It’s kind of like building a highway. If you wait until you max it out, then you’re in trouble to start with because you’re still looking at two years down the road. You’re really just adding to the problem,” he said.

Rushing believes renovating the older section of the jail is the best solution for now.

“I would say five years from now y’all probably could start looking at a new jail and then it would be a year or two project, I would think at least,” he said.

Supervisors pressed him for his recommendation.

Rushing suggests they consider building a single-level jail where it could expand if needed up to 150 to 175 capacity.

“Then if you needed to add another 25 beds somewhere, you could build onto that,” he said. “When they renovated and built this one, they left no room for growth. There’s no where to go down there.”

Falvey was satisfied with Rushing’s information.

“I think it’s good that we can talk about it. Like I said, if you don’t plan you can get yourself in a bind,” Falvey said. “I don’t think you can ever start too early planning. Somebody needs to have a vision of what we need and which way we need to go.”

While the board considers starting a jail project in several years, it will also need to find a place to put it.

By state statute, it has to be within the city limits of the county seat, Rushing said. However, a legislative bill can allow it to be built outside the city limits, he said.

“You’re not going to find nowhere around here, out of any area, where they’re going to say, ‘Yes, let’s build a jail,’” District 4 Supervisor Eddie Brown said.

The average cost for an inmate is $36 a day, Rushing said. They are provided full medical, dental and mental health benefits while incarcerated as well as clothing and three meals a day.

A nurse comes every other day and coordinates with a doctor.

Lincoln Countians capped off their celebrations of the Fourth of July with traditional fireworks displays, like the one at the... read more