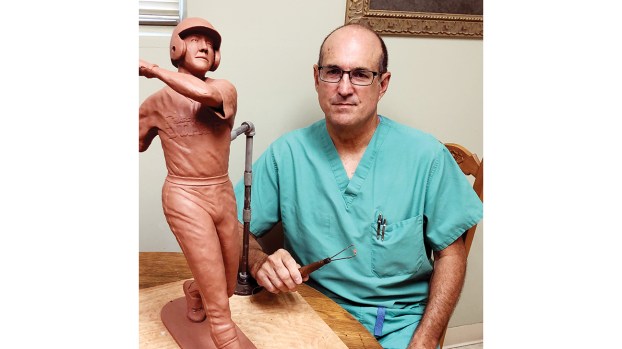 Photo submitted Brookhaven dentist Rusty Reid, who created the dual 8-foot bronze sculptures at the entrance to MSU’s Dud Noble Field, is the guest speaker Thursday for the Rotary Club of Brookhaven-Lincoln County.

The Brookhaven dentist responsible for the now iconic entrance to Mississippi State University’s Dudy Noble Field will speak to the Rotary Club of Brookhaven-Lincoln County Thursday about his latest works of art.

Rusty Reid, a Mississippi State alumnus and local pediatric dentist, will be the speaker at Rotary, which begins at noon at Poppa’s Buffet & Grill on Hwy. 51. He will discuss the statues he sculpted and donated to MSU of former baseball players Raphael Palmeiro and Will Clark.

The statues were unveiled in February of this year at the entrance of the new $68 million baseball stadium. The statues show younger versions of the star players in key poses.

Reid met with MSU Athletic Director John Cohen and he was asked to do the project.

“I just said, ‘If you need any form of art, I’d be glad to be involved in it and it would be such an honor,” Reid told The Daily Leader earlier this year. “John Cohen told me a new baseball field was coming, and I walked out of there with the Thunder and Lightning project. I never imagined it would be on that scale.”

Reid, who attended Mississippi State from 1979 to 1983, never met Clark or Palmeiro. But he got to know them through the process of recreating their likenesses.

He was able to talk with and visit Clark and Palmeiro to take pictures and videos of them. Clark even loaned him the bat he used in college so Reid could use the proper dimensions for the sculptures.

“It turned out to be the highlight of my sculpting career,” Reid said. “There’s not a ton of opportunities to do monumental bronze statues. It’s such an honor to do a project of this magnitude, to do something I love to do, especially for my alma mater.”

During the two years it took to create the sculptures, Reid alternated between spending time at his dental practice and the studio he leased in Starkville. On Monday through Thursday, he worked at his office. After work on Thursday, he’d drive up to Starkville to work on the sculptures. He’d drive back down in time to go to work Monday.

“I had the luxury of the athletic department to go into archives, pictures, everything I could see to make the statues period correct, like the uniforms they wore, the shoes, the helmets,” Reid said.

Even though he doesn’t create art for a living, Reid is satisfied with fulfilling his passion as a hobby.

“The Good Lord has given me the opportunity to revisit a passion from when I was young,” he said. “I did still have an opportunity, I just happened to be 58 to do it on a large scale and it was so much fun to do. I’m happy to have art as a part of my life.”

A Wesson man accused of shooting to death a 7-year-old boy last month will face a Brookhaven judge Tuesday at... read more