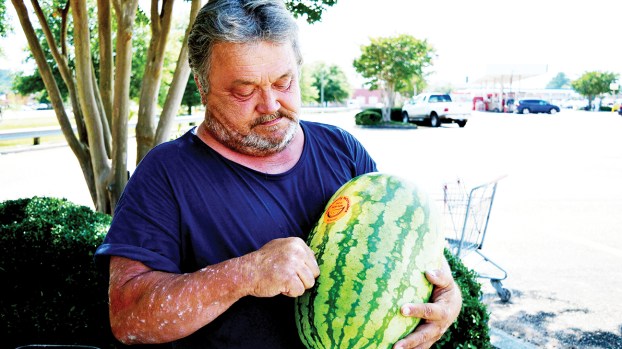 Photo by Gracie Byrne Allen Brown checks a watermelon for ripeness at his set-up stand on Brookway Boulevard Tuesday.

A Bogue Chitto man sells his wares to passersby on hot summer days.

Allen Brown sells his fruits and vegetables throughout the year to people on Brookway Boulevard. He has regular customers who stop by to see him as often as every day.

“Especially during this time of the year, I’m selling,” Brown said.

Brown has several fruits and vegetables he sells. Watermelons, cantaloupes, peaches and squash are just some of what he has. He also sells red and green tomatoes.

He started selling in August of last year, and it keeps him occupied since he retired from driving trucks.

“It gives me money and something to do,” Brown said.

The watermelons Brown sells don’t come from his own garden, but from Smith County.

“For some reason, I can’t grow watermelons,” Brown said. “I can grow beautiful plants, but not melons.”

Brown said that Fridays and Saturdays are often his busiest days.

“They keep coming back,” Brown said.

Most of the time he sits in the parking lot adjacent to Hudgey’s but lately he has set up at the edge of Walmart parking lot. Brown says he went on vacation and came back to find his usual spot occupied.

“I usually sit at Hudgey’s all the time,” Brown said.

For people buying from him, Brown shows them how to tell the ripeness of what they’re buying. With watermelon, it’s the sound.

By thumping the watermelon, one can listen to how hollow the inside is. This determines if it’s ripe enough or not — how deep the sound is, he said.

For tomatoes, it’s watching the color. Brown advises that if you buy a tomato that isn’t quite ripe, one can help speed up the process.

“You can sit it in the windowsill,” Brown said.

The Lincoln County School Board is asking its stakeholders — administrators, teachers, parents, business owners and residents — for help... read more