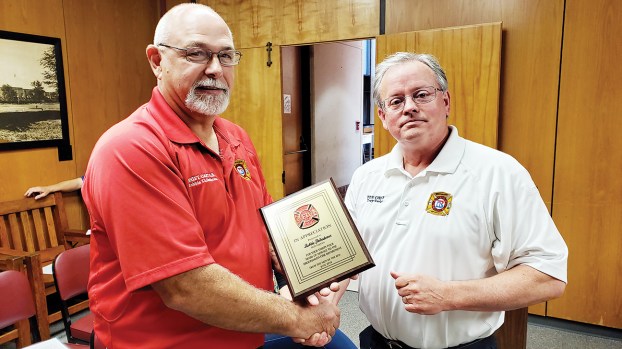 Photo by Donna Campbell Brookhaven Fire Department Chief Tony Weeks presented Capt. Robbie Thibodeaux with a plaque, recognizing his 34 years of service with BFD, at a recent Board of Aldermen meeting.

Though his stepdad wore a lawman’s badge, Robbie Thibodeaux found another way to serve his community.

Thibodeaux hung up his turnout gear and grabbed his rod and reel, retiring after nearly 34 years with the Brookhaven Fire Department. Thibodeaux finished his three-decade career as a shift captain.

The 56-year-old Hog Chain man said it was the right time to retire, while he’s still got time to reel in a prize bass or down a massive buck.

He’ll also have more time to spend with Kim, his bride of 37 years.

Thibodeaux moved to Lincoln County his sixth-grade year because his stepfather, Ray Gravelle, took a job on the Brookhaven Police Department. Gravelle later worked for the Lincoln County Sheriff’s Office.

After graduating from Brookhaven High School, Thibodeaux took a job with Southwest Electric to pursue a career as a lineman. He liked working outdoors and fixing things so it seemed like a good idea. But he also joined the New Sight Volunteer Fire Department and the idea of helping his community also held a strong appeal.

A firefighter friend in Brookhaven told him about an opening for a paid position in the city and urged him to apply. He did and was hired. To help make ends meet for himself and his wife, Thibodeaux opened his own electrical business and served customers on his off days.

Few firefighters choose their career for the money.

“Most everybody’s got a second job,” he said.

At the fire station, he worked 24 hours on and then was off for 48. His older brother Buddy liked those hours, too, and joined the department about five years later. He’s still a year or so away from his own retirement.

Thibodeux said the job comes with highs and lows. The possible danger involved with every call can be an adrenaline rush.

“You don’t ever know what you’re going to run into,” he said.

But with every hill there’s a valley he tries to forget. Thibodeaux’s seen too much sadness in his career like fatal car wrecks and the charred remains of homes and people’s livelihoods.

“I’ve seen so much stuff over the years. There’s a lot of stuff I’ve actually forgot,” he said.

It’s easier to get over it that way.

What he chooses to remember, though, is the camaraderie he’s felt from being on a team of firefighters who are willing to risk their lives for each other and their community every day.

As shift captain, he was in charge of the men on his crew, but he was never one to send them into a blaze alone. Thibodeaux fought fires right along beside them.

Running into burning buildings while others are running away might sound crazy to some. Thibodeaux didn’t dwell on the risk. He just suited up and headed in.

“You’ve got a mindset of what your job is when you put your gear on,” he said.

He’s seen his share of fires and traffic crashes, but he’s trained extensively for emergencies that thankfully never required his services, like a train derailment or explosion.

Now that he’s retired, Thibodeaux plans to hunt and fish more and spend some time with his two grandchildren, a girl and a boy.

New doors at BA are a Grand thing

Students at Brookhaven Academy can start the new school year secure that the GrandCougars care about their safety. The grandparents’... read more