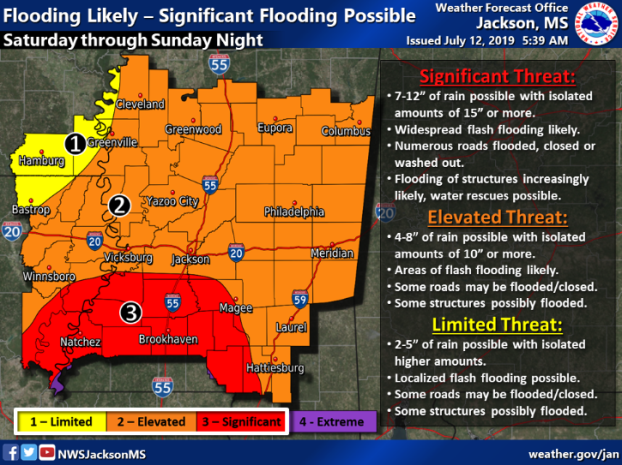 Tropical Storm Barry could drop half a foot of rain or more over Lincoln County this weekend depending on its strength at landfall, a Lincoln County official said.

Barry could blow ashore as a Category 1 hurricane on the Saffir-Simpson scale, but only if it stalls over the warm water of the Gulf of Mexico, according to AccuWeather meteorologist Dan Kottlowski.

“It’s still far off, but we’re looking at between 6 and 10 inches from today to Sunday night and about a 30 percent chance of seeing tropical storm force winds — 39 to 74 mph — sometime Saturday or Sunday, probably more likely Sunday,” he said. “If it doesn’t change tracks very much it’s looking more like a major rain event than anything else.”

Galey said the ground is mostly dry and all the creeks and rivers are low, about normal for this time of year.

“But if it all comes in just a few hours we’ll have a little bit of flooding,” he said.

Flash flooding in thunderstorms is always a possibility.

“If you live in a low-lying area that when we get a hard rain it floods, you might want to think about looking at it and leaving before that happens so we don’t have to come rescue you,” he said.

County and city officials expect to declare a state of emergency this morning, he said. That allows officials to make weather-related decisions like open a storm shelter. That’s a decision that will be made later today, he said.

Galey is included in a conference call with the National Weather Service and other officials at 11 a.m. today. He’ll have a better idea of what the storm is going to do after that.

In the meantime, it’s never too early to prepare for a hurricane. Every home should have a disaster kit prepared.

“You should already have that. If you don’t, you should see about going ahead and trying to get you some of it.”

Bruce Gray considers each of his daughters to be a princess, but only one of them is making a career... read more