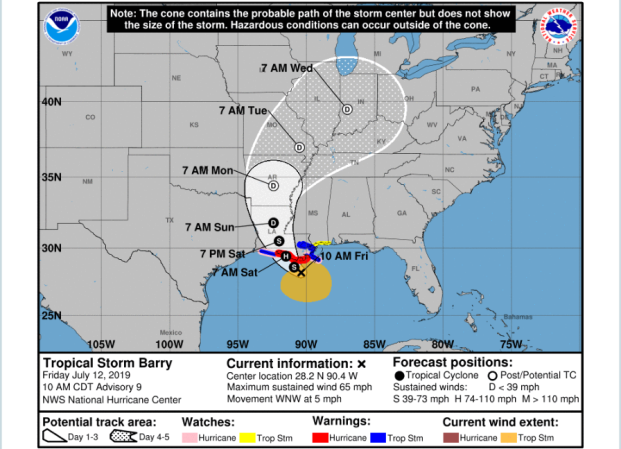 Brookhaven aldermen and Lincoln County supervisors this morning declared emergencies in the city and county to prepare for a worst-case scenario if Tropical Storm Barry’s winds and rains cause flooding and property damage in Southwest Mississippi.

Lincoln County Emergency Management Director Clifford Galey met with the boards back-to-back this morning to update officials about what to expect from Barry.

“We’re looking at Saturday through Sunday night some 7- to 10-inch rainfall amounts, maybe as much as 15 in some places,” he said. “I’m not going to be a bit surprised before the day is over to see that go higher.”

At 10 a.m., the U.S. National Hurricane Center said Tropical Storm Barry is strengthening as it approaches the Louisiana coast and is again expected to become a hurricane when its center reaches land.

In a morning advisory, the hurricane center said Barry’s maximum sustained winds have increased to near 65 mph with additional strengthening expected before landfall. It was churning at 50 mph at 7 a.m.

A storm surge warning has been issued for Lake Pontchartrain, Louisiana, and eastward to Biloxi. Hurricane warnings are in effect along the Louisiana coast. The storm’s center is expected to come ashore Saturday.

Galey said he expects Barry to strengthen as it lingers in the Gulf of Mexico.

“It’s moving really slow and that water in that Gulf is hot,” he said.

He expects Barry to make landfall in Louisiana as at least a Category 1 Hurricane between Morgan City and New Orleans.

“It will probably be just west of the Mississippi River when it comes up to see us,” he said.

“If you’re in an area that typically floods in heavy rains, find an alternative place to stay,” he said.

Officials can open the Brookhaven Building as a shelter if needed, but they have not made that decision yet.

Tropical Storm Barry could drop half a foot of rain or more over Lincoln County this weekend depending on its... read more