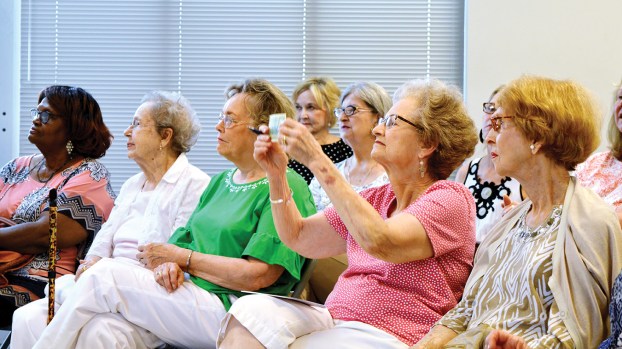 Photo by Gracie Byrne Ann Morris holds up a counterfeit $100 bill to the light to check it. The Vernondale Neighborhood Watch group hosted an educational meeting about scams Thursday.

A Brookhaven detective handed out cash to those who attended a community neighborhood watch meeting Thursday night.

It was counterfeit, however. Of course, the funny money was worthless except as a teaching tool to show people how easy it can be to get scammed.

Capt. Clint Earls talked to dozens of people who came to the Jimmy Furlow Senior Citizen Center to hear about scams.

It’s easy to be fooled by counterfeit bills unless you pay close attention. Usually they’re smooth and lighter weight than federal currency. It can also be marked with Chinese writing or be designated as movie prop money.

Either way, the fake money is a lie.

“People involved with illegal activity will not tell you the truth,” Earls said.

Earls has worked with the city of Brookhaven for 29 years, and he has 17 years of experience working with three different K-9 drug units.

Counterfeit money isn’t the only scam to be on the lookout for.

One type of scam involves scammers pretending to be stranded and in need of help. They often use sad stories to pull people in and manipulate their emotions, he said. An example would be someone needing gas money to go visit their relative who’s had an emergency.

While some scams come at you in person, the majority of scams Earls and the rest of the police department see often involve the scammer concealing their identity in order to stay anonymous. This leads to scammers being untraceable.

“The cell phone is a miniature computer,” Earls said. “It allows them to remain anonymous, so they can be anyone they say they are.”

A scam that is becoming more common involves someone pretending to be from various agencies such as the Internal Revenue Service.

This method is called fishing, where scammers will “fish”0 for information from unsuspecting individuals.

Earls played an audio conversation between a scammer pretending to be from the IRS, requesting gift cards as payment from an individual.

Earls reminded the people listening that the IRS will never contact someone by phone as a first attempt at communication. The IRS reaches out by U.S. mail first.

Spoofing is also a problem, he said.

Spoofing is when a caller deliberately falsifies the information transmitted to your caller ID display to disguise their identity. Scammers often use neighbor spoofing so it appears that an incoming call is coming from a local number, or spoof a number from a company or a government agency that you may already know and trust. If you answer, they use scam scripts to try to steal your money or valuable personal information, which can be used in fraudulent activity.

To stop scams at the lower levels, Earls explained to the crowd that they were the answer.

“Our biggest defense against this is you,” Earls said.

He said to avoid giving sensitive information over the phone, especially if you didn’t initiate the call.

“The best defense is a good offense,” Earls said.

Fraud alerts offered through various credit bureaus and your financial institution can add an extra layer of protection in case someone is able to get access to financial information.

“Credit bureaus are your strongest defense against scammers,” Earls said.

A 10-day camp meeting full of worship and fellowship begins this weekend in Ruth with the annual Felder’s Camp Meeting.... read more