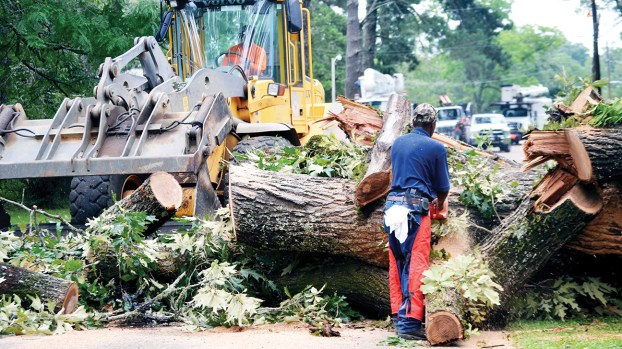 Photo by Donna Campbell Brookhaven Street Supervisor Burt Wilson works to cut up a massive oak tree that fell across Natchez Avenue Monday so crews can use a front-end loader with a log grabber attachment to clear the street. Entergy worked to restore power to the area after the tree was removed from the line. About 112 customers on South Jackson and Natchez were without power for several hours.

Crews worked Monday to remove a massive oak tree that ripped down power lines as it fell across Natchez Avenue, leaving about 112 Entergy customers without lights and air conditioning for most of the afternoon.

That tree looks to be the biggest casualty of Hurricane Barry, which made landfall Saturday in Louisiana and was downgraded back to a tropical depression Sunday afternoon.

Brookhaven Street Supervisor Burt Wilson said the tree  — at the corner of Hardy Lane and Natchez Avenue — likely toppled because the ground was saturated from Barry’s rains.

Power was restored to customers along South Jackson and Natchez about 6 p.m.

There seemed to be even less damage from Barry in the rural areas of the county.

Lincoln County Emergency Management Director Clifford Galey told the Board of Supervisors Monday morning that his office received a call of three or four trees down and deputies were dispatched to block off the area to prevent motor vehicle accidents. When deputies arrived, they discovered the trees were only limbs and removed them from the roadway, Galey said.

“We did really well. We did not get the rain we expected,” Galey said.

He explained that the storm had effectively split and traveled to either side of the county, having little effect on the area.

“Thankfully, we did not have to use these anywhere,” he said.

A total of 200-225 power customers were without service Monday morning across the county, Galey said, the most in the duration of this storm.

The storm’s passing does not mean the county is going to avoid more rain, he said. Three to four inches of rainfall was still expected to fall Monday and today, and more rain was in the forecast through the week.

“We kind of lucked out, didn’t we?” asked District 2 Supervisor Bobby Watts.

“We were lucky,” said Galey.

Lucky was also the word used by Mike Edmonston, senior meteorologist with the National Weather Service in Jackson.

He said it was difficult to forecast the probability of Barry’s movements.

“It’s too hard with tropical systems with spiral bands that set up to pinpoint exactly where they may set up and go,” he said. “That thing was shifting on the storm track and intensity. Because of the nature of a tropical storm this stuff occurred in bands and Brookhaven just got lucky enough that it missed the significant bands.”

Edmonston said some of the heaviest rain fell east of I-55 even though the center of circulation was to the west.

He expects the heat and humidity to return later this week, with a heat advisory likely in effect Thursday and Friday. He predicts temperatures will be in the low- to mid-90s with high humidity.

He is forecasting a chance of scattered showers Saturday afternoon, but that could change as the week progresses.

Three Lincoln County Republicans are seeking to fill the chancery clerk’s seat that will be vacant when Tillmon Bishop retires... read more