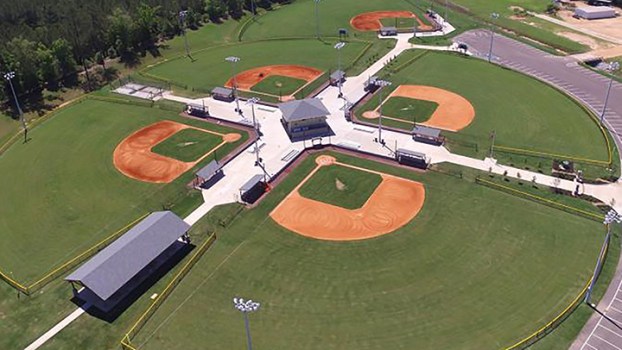 Ready or not, here they come. The Dixie Youth Baseball Invitational World Series begins Thursday at the Lincoln Civic Center Baseball Complex and runs through Sunday.

Facility manager Quinn Jordan says that the hay might not quite be in the barn yet, but it’s been cut and bailed and ready to be stacked. Jordan and his assistant Gerri Miller are putting the finishing touches on their long to-do list.

“Right now, we’re just making sure the final, small details have been handled,” said Jordan. “For such a long list of things we’ve had to do in the planning of the event, it’s all come together very smoothly.”

The event will utilize four of the five fields at the Lincoln County Baseball Complex along with the four fields at the Hansel King Sports Complex. The Civic Center will also be used as well as the FEMA Building for feeding the teams when they arrive on Thursday. The covered arena will be the site of the opening ceremony on Thursday.

All five brackets have teams that represent Lincoln County in them. There are 46 teams spread over the five brackets with all coming from Mississippi, Alabama, Tennessee, Louisiana, Texas, Arkansas, or Oklahoma.

The award for longest journey to the tournament goes to the team from Sweetwater, Tennessee who will travel 507 miles to Lincoln County. Sweetwater is located 45 miles southwest of Knoxville.

Pool play will take place Friday and Saturday. Each team will play two pool games each day that will determine seeding for a single elimination tournament that begins on Sunday. What does Jordan still need on the eve of the tournament? Volunteers for Sunday, especially during the times that many locals will be in church services.

“We could still use some volunteers from 8 a.m. till around 2 p.m. on Sunday,” said Jordan. “We’ll be entering championship play in the afternoon and we need some more folks to greet or work under one of the tents. We’ve got people to collect money, but we could use a few more smiling faces. I can be reached at 601-823-9064 for anyone that’s still wondering how they can get involved and volunteer.”

On Thursday the teams will check in at the facility and take part in a Team Games and Skills Competition beginning at 2:30 pm. They’ll play Around the Horn, King of Swing (homerun derby) and a speed competition called Diamond Dash that will involve timed base running.

A tournament pass that will get you into the games all weekend costs $25 for those 13 and up. The price for anyone 6-12-years old is $15 and 5 and under get in free. Single-day admission is $10 for 13 and up and $6 for ages 6-12. Tournament passes can be bought 5-7 p.m. under the stall barn adjacent to the arena on Thursday and at the gates beginning Friday.

In the 6U T-Ball bracket the Lincoln County team plays Sabine, Louisiana, Friday at 11:15 a.m. on field one at the Hansel King Sports Complex. LC will play again at 4:15 p.m. on the same field against Atlanta, Texas. On Saturday they’ll play at 10 a.m. on field one at the King Complex against Texarkana East, Arkansas and they’ll wrap up bracket play at 3 p.m. on Saturday against Idabel, Oklahoma.

The 7U Coach-Pitch tournament will also be held at the King Sports Complex. Lincoln County plays Gonzales, Louisiana, on Friday at 3 p.m. and Texarkana East, Arkansas at 5:30 p.m. Both games will take place on field two. They’ll be back on field two Saturday for a pair of games against Pike County at 10 a.m. and Splendora, Texas at 1:45 p.m.

Field one and two at the Baseball Complex will be where the 9U games take place. Lincoln County plays Pike County on field one at 11:45 a.m. on Friday and then Paris, Texas on the same field at 5 p.m. The LC team plays both their games on field one Saturday when they first take on Oakdale, Louisiana at 10:45 a.m. and then Ponchatoula, Louisiana, at 4 p.m.

The oldest age group, the 11U Ozone bracket, will play on fields three and four at the Baseball Complex. The Ozone teams will only play three bracket games each. Lincoln County takes on Laurel at 12:45 p.m. on Friday and Nacogdoches, Texas at 4:15 p.m. Both games will take place on field four. They’ll wrap up pool play Saturday at 2:30 p.m. on field four against Morgan City, Louisiana.

A helpful tool to any parents or fans of the tournament is the Attendify app. It can be downloaded in the app store and allows users to access all the pertinent information regarding the tournament including brackets. The app also has an interactive map and can be found by searching DYB Invitational World Series within the app.

Hotels in the city are experiencing a boon from the tournament and many of the teams have had to seek lodging accommodations in surrounding counties. Jordan says the tournament has come together through the work of a long list of people.

“With our paid employees and volunteers that will work through the weekend, you’ve got a list of over 100 people that are going to be involved,” said Jordan. “Our sponsors play a big part in making this happen, but it couldn’t be done without the work of our volunteers. A lot of people have been working hard, especially Miss Gerri, and we’re just excited to show off Brookhaven and Lincoln County to these teams coming in.”

7U All-Stars ready for World Series

The 7U All-Stars representing the Lincoln County American League will be one of over 40 teams taking part in the... read more