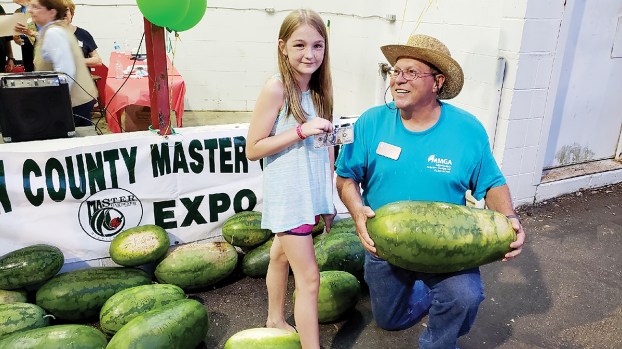 Every watermelon’s a winner at the fair

Though she grew peas, butterbeans, corn, okra, cantaloupe and three other varieties of watermelon, it was the 37-pound, 8-ounce Congo melon she grew from seeds given to her by the Lincoln County Master Gardeners that won the prize.

The gardening group gave out hundreds of seeds earlier this year to eager fourth-graders in Brookhaven and Lincoln County schools, Brookhaven Academy and homeschoolers with a short list of instructions for planting. The goal is to get their hands dirty and grow a desire to garden, said Master Gardener Steve Edge.

Prizes for the annual contest include $100 for the heaviest watermelon, $50 for second place and $25 for third place.

In addition, a $25 prize will go to a boy and a girl from each elementary who weighs in with the heaviest watermelon from their school. Weigh-in is Aug. 3 from 6 to 8 p.m. at the Exchange Club Fair.

The Exchange Club also provides a free armband for unlimited rides for Aug. 3 to each entrant.

The contest is open to all Lincoln County fourth-graders who planted the Congo seeds provided by the Master Gardeners. The Congo was judged nationally as an All-American winner in 1950. It has white seeds when it is ripe, Edge said.

The Master Gardeners’ goal was for the students to take the 15-19 seeds they were given and grow melons — the bigger the better. Through the process, they’re hoping to get a younger generation interested in horticulture.

When he passed out the seeds, Edge suggested the students find a nice, sunny spot — watermelon plants need at least four hours of sun a day — and get the seeds in the ground as soon as possible. They take about 90 days to grow, so that puts them ready right around time for the judging, he said.

Students should be watching the watermelons’ tendrils. When it’s near ripening, the tendril turns brown. When the skin is smooth, the bottom will be golden, not white. Gardeners can also try the thump test. Thump it and it will sound hollow if it’s ready.

The Brookhaven Exchange Club signed on as a prize sponsor last year as a way to encourage participation by giving each student who brings a watermelon to the weigh-in a free armband good for unlimited rides that night.

Last year, Sayerd Harveston of Loyd Star won second place with at 32-pound, 5-ounce melon, and Kaleigh Davis of West Lincoln was right behind him in third place with a 31-pound, 7-ounce fruit. They received cash prizes as well.

Edge said he’s pleased with the participation and hopes it will continue to grow. He wants to see the participants continue gardening once they see that they can grow something on their own.

Poll workers are needed in Lincoln County to help with the upcoming primary elections and the runoffs that will likely... read more