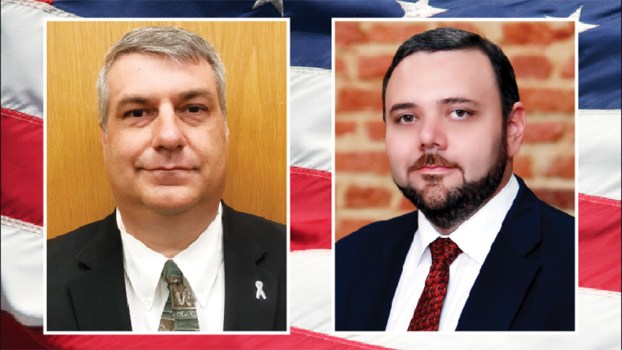 DA contenders weigh in on issues

The two men who want to serve as district attorney for the 14th Judicial District of Mississippi are at odds over who is better suited for the position.

Dee Bates, the Democrat incumbent with 16 years on the job, believes he is the only candidate qualified to be DA for the district that includes Lincoln, Pike and Walthall counties.

“I have personally prosecuted, tried and convicted murderers, rapists, burglars, drug dealers and every other type of felon,” he said.

“We cannot continue to do the same things we have been doing for years and expect a different result,” he said. “The first thing we must do is get tough on crime.”

Both men will be on ballots for the primary, but their race won’t be decided until the general election Nov 5.

Bates and Norton — listed below in alphabetical order — emailed their responses to three questions.

Experience for district attorney: As the DA for 16 years, I am the only candidate qualified for my position. I have personally prosecuted, tried and convicted murderers, rapists, burglars, drug dealers and every other type of felon. I have been responsible for prosecuting all felony cases investigated by the numerous law enforcement agencies in Pike, Lincoln and Walthall counties. To date, this amounts to prosecution of well over 17,000 individual cases. I have met with thousands of victims of crimes and know the horrible effects of crime on them, because I have sat with them, heard their stories, felt their frustration and anger, and shared their tears. I know that often the only comfort and closure these people will obtain is through the prosecution of those who victimized them, and I have made it my life’s work to see that they are able to obtain the best results possible within our legal justice system.

Do you think our court system is tough enough on violent crimes? What would you change?

Yes, but there is always room for improvement. Violent crimes include some DUI cases, home burglary, aggravated assault, robbery, child abuse, sex crimes, murder and others. Our law allows sentences of 30 years to life on many of these, and most require the defendant serve every day of his sentence.

For example, I recently tried two different armed robbery cases in Pike and Lincoln counties. One — a teenaged offender — was convicted and sentenced to 15 years; the other — a prior-convicted felon — was sentenced 48 years. They will have to serve every day of those sentences. These are typical of the cases my office handles and I think it is fair. However, some violent crimes, like aggravated assault, only require the defendant to serve half of the sentence ordered by the court. I would prefer our legislature change this to require anyone convicted of violent crimes serve the entire sentence.

How can you improve the criminal justice system in the 14th Judicial District, which covers Lincoln, Pike and Walthall counties?

During my next term I plan to improve our system by continuing to be responsive to the people I serve, specifically the victims of the criminals I prosecute. I plan to continue to work closely with each of the law enforcement officers in my district. This includes more than 15 separate agencies. This week I held separate training sessions in Lincoln, Pike and Walthall counties for officers from our various agencies. The purpose of this was to update them on changes in the law this year and to discuss ways to facilitate better handling of cases district wide. I have been doing this every year and will continue to do so. I have spent more than 16 years establishing the strong working relationships I have with our officers, it is something I value, and I look forward to continuing it as I serve our citizens during the next four years.

What do you believe is the greatest challenge you will face if elected as district attorney and how do you plan to tackle it?

The most serious obstacle which I will face during my next term will be the continued pressure by outside groups determined to restrict the authority of our courts to prosecute and punish criminals. This is manifested in various ways, from criminal reform activists who want to de-criminalize certain drug crimes, the prison system which increasingly releases non-violent criminals after they have served only a small percentage of the sentence they were ordered to serve, and inadequate funding of our state crime lab which causes lengthy delays in my prosecution of cases. As a long-term member of the Mississippi Prosecutor’s Association Legislative Committee, I have worked closely with our state legislature and successfully stopped numerous such infringements on the rights of our citizens and I plan to continue to do so. I have also called for our legislature to adequately fund the Mississippi Forensic Lab and State Medical Examiners office.

I have practiced law in Southwest Mississippi since 2009, with emphases in criminal law, family law, estates, real estate transactions and general litigation. I’m currently a partner at Boerner Law Firm and handle the majority of our criminal law cases. During law school, I was one of the first at the University of Mississippi School of Law to receive a criminal law emphasis certification for coursework in criminal prosecution.

Do you think our court system is tough enough on violent crimes? What would you change?

Absolutely not.  We are dealing with a very different criminal element than we did 16 years ago, one with a desire for violence and no fear of penalty.

The proof of this is the number of repeat offenders in court with violent criminal histories. The frustrating thing is, we already have laws to deal with this. Mississippi law states that a third-time felon with a violent criminal history “shall be sentenced to life imprisonment,” with no possibility of parole or other release.

It is the responsibility of your district attorney to enforce these repeat offender laws through the court system, and to make sentencing recommendations to the court.

We have to send a strong message that we will not tolerate this behavior in our district, and we do it through tougher penalties for all violent crimes. This is how we punish offenders and stop like conduct by others.

How can you improve the criminal justice system in the 14th Judicial District, which covers Lincoln, Pike and Walthall counties?

We cannot continue to do the same things we have been doing for years and expect a different result.

The first thing we must do is get tough on crime. We will do this by strengthening penalties, punishing offenses and showing other would-be criminals that we will not tolerate it any longer.

We also have to support our law enforcement officers with training on changes in the law. We have some of the finest law officers in the country, but it is unfair to expect them to enforce laws which they have not been educated about. If we want our laws enforced, our enforcers have to know the law.

We have to ensure every citizen fair and equal treatment under the law. Different penalties for the same offense violate our sensibilities, as well as our Constitution. We have to make sure that everyone is treated equally.

What do you believe is the greatest challenge you will face if elected as district attorney and how do you plan to tackle it?

I believe the greatest challenge will be pushing reform and change into a resistant legal system. Things have been done a certain way for a long time, and old habits die hard. However, we must make this push with hard work and plain old bullheadedness, refusing to stop what we know must be done.

Another great challenge will be trials of the tragic cases now before us. Our district has been in the national spotlight for horrific reasons within the last four years, from the murders of law officers and families to a 7-year-old child sitting in his living room. These cases now must go to trial, and justice pursued no matter how hard the course. I will not be outworked, and I will not stop fighting until it is finished.

People may vote absentee for several reasons, including if they will be out of town on election day, if they are temporarily or permanently disabled or if they are 65 or older, Bairfield said.

City gets $190K for hangar rehab

Brookhaven scored a small share of a $3 million Mississippi Department of Transportation grant that will allow for hangar rehabilitation... read more