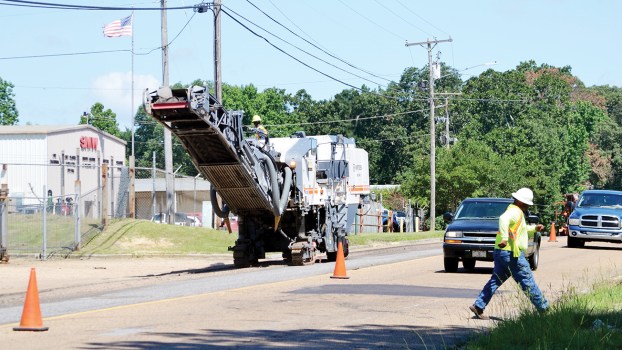 At least two projects city engineering consultant Ryan Holmes has his hand in are on the right track, he told the Brookhaven Board of Aldermen this week.

The city is funding the project with $500,000 in BP oil spill settlement money. Dickerson & Bowen of Brookhaven won the project bid of $502,652.

Crews began in mid-June. The project began near Rebel Testers on Union Street Extension where the four-lane, state-aid highway narrows to the two-lane, city-owned road. Paving turned at Industrial Park Road, and crews crossed over Hwy. 51, then continued to the intersection of North Jackson Street, said Holmes, who designed the plans for the improvement project.

The 1.235-mile project took about four weeks to complete.

The city and county received $500,000 each after state lawmakers in last August handed out $111 million in funding across the state, with $61 million coming from the state’s BP oil spill settlement and $50 million borrowed.

The project to enhance the industrial park’s connection to the interstate has been going for over two years. Supervisors began helping the city resurface Manufacturer’s Boulevard and Industrial Park Road Northeast — parts of both are county-owned and maintained under the Mississippi Office of State Aid Road Construction — in 2016 with a $1.25 million federal grant.

The boulevard in the park has been resurfaced, and so has the section of Industrial Park Road Northeast from the park west to the intersection with North Jackson Street. But from North Jackson Street to I-55 has remained untouched and in need of repairs to continue supporting the heavy trucks to and from Walmart Distribution, McLane Co. and other businesses in the industrial park.

While Holmes was addressing the board about the paving project, Ward 4 Alderman Jason Snider asked for an update on the fire station under construction inside the former Boling-Hoskins Motors building on North First Street.

Paul Jackson & Son of Brookhaven is handling the construction on the project. The architect is Waycaster & Associates of Natchez.

Holmes said recent rains has slowed down some of the work at the North First Street site. Many of the studs are up and electrical and plumbing are going in he said.

Sitework and drainage work are starting and he expects work to ramp up in the next coming weeks.

“It’s moving along quite nicely,” he said. “Right now, we still think we’ll meet our target date of late November. Hopefully we’ll get the work outside the building complete before we hit the rainy fall weather.”

The project is mainly funded through $625,000 earmarked in the 2016 session by the Mississippi Legislature “to authorize the issuance of state general obligation bonds to assist the city of Brookhaven in paying the cost of construction, furnishing and equipping a fire station.”

Fire Chief Tony Weeks, Mayor Joe Cox and the former administration had pitched the city’s need to replace Fire Station 2 to different sources since 2014. The current station on Willard Street — a metal building constructed in the 1970s — has suffered a series of maintenance issues over the years. When the project was first proposed, Weeks recommended the new station be built larger than the existing facility. He said city fire trucks are barely able to fit into the current structure’s bays.

Sen. Sally Doty and Reps. Becky Currie and Vince Mangold, all Republican lawmakers from Brookhaven, voted in favor of a multi-million-dollar bond bill in April 2016, $625,000 of which was designated for a fire station. The money has remained in the city’s general fund, drawing interest at a standard rate.

The new station is being built in an existing structure on the North First Street site. The architect has designed plans that will showcase the history of the building.

The station will be larger than the current firehouse with a drive-through bay built on the side so trucks can enter on North First Street and exit from behind the building. There will be additional parking areas inside the building for smaller trucks.

Dinki Davis is stocked up on sausage. She’s got extra flour and buttermilk, too. They’ve brought in more troops, and... read more