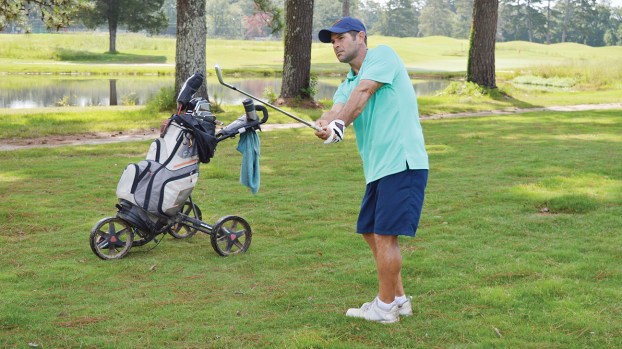 Photo by Gracie Byrne Yancy Methvien prepares himself to swing on the 11th hole of the golf course at the Brookhaven Country Club. Methvien is working to break the record of most rounds of golf played in a year.

A local resident has played golf nearly every day throughout 2019.

Methvien, 42, is originally from Springfield, Louisiana. When he was 6 his family moved to Franklin County, where he lived until he graduated high school. He then attended Copiah-Lincoln Community College.

He later enlisted in the Air Guard before serving in the Coast Guard. Overall, he has nearly 15 years of military service. In 2015, he was released on a medical retirement.

While in the military, Methvien was an electronics technician, where he worked on board weaponry systems.

“It made me feel like I was doing something important,” Methvien said.

After he got out of the military, he attended Coastal Carolina University. Methvien nearly changed his major to golf management, but instead stuck with business.

While he was in the Coast Guard, his mom bought a place in Brookhaven.

In between serving, he came home to help with his grandparents. They had gotten older and needed more care. During this time, his friends tried to get him out of the house when he was available.

Methvien says they took him to Quail Hollow to play free three-hole games on Wednesdays.

“They’d just kill me at the game,” Methvien said.

Methvien has multiple inspirations for breaking the record. One is his grandmother, and he regrets not getting to play golf with her.

Other inspirations are his parents. His father, who has battled cancer for the last four years, and his mother, who recovered from two hip replacement surgeries. One could say his grit and determination is inherited from them.

While he was able to play some while in the military, Methvien says he didn’t know a whole lot about the sport. He credits Eric Stone, a man he’d met while in California, for many of the things he’s learned about the game.

“The game is a quiet place where I can reflect or bond with friends,” Methvien said.

He says the game has helped him connect with other veterans. He also enjoys what the game does for him mentally and physically.

“The benefits were becoming more and more evident,” Methvien said. “This game is not just good for veterans, but everybody.”

One reason Methvien is attempting to break the record is to shine light onto the Veteran’s Golf Association. The VGA, founded in 2014, holds tournaments every weekend across the country.

Methvien says there isn’t a lot of interest in the VGA in Mississippi, and he hopes to change that.

“We get to do everything we get to do because of the veteran’s grind,” Methvien said.

He wasn’t interested in staying in his lane in regard to golf, or veteran affairs.

“Instantly I knew it would be almost impossible, but not for me,” Methvien said.

By working toward breaking this record, he hopes to bring awareness to veterans.

“I’d like to let veterans know that other veterans feel how they do,” Methvien said.

The only time he doesn’t get to play is when there’s a strong chance of causing damage to the course or himself, in case of freezing temperatures or lightning.

Since Jan. 1, he’s played 485 rounds of golf, with a majority of those being played in Brookhaven. If you do the math, that’s almost 9,000 holes in seven months.

“The people that work here have been amazing with this,” Methvien said. “I haven’t had to ask; they just do it.”

He’s suffered from sprained ankles, mosquito bites, run-ins with snakes, blisters on every finger and toe, flying golf balls and even lightning striking close by, but he’s kept going.

He plays a minimum of two and a half rounds each day, which is 45 holes’ worth of golf. Some days he’s played four rounds before.

Methvien has played almost exclusively this year at Brookhaven Country Club to break the record, but he’s also played at golf courses in the surrounding areas.  Earlier this year he won a VGA tournament at Deerfield Golf Club in Canton.

“It was nice to win so close to home,” Methvien said.

So far this year, he’s gone through four pairs of shoes, and it’s been the only thing he’s had to replace. He’s still using his same clubs he received as a graduation gift in 2018.

All of the equipment he lugs around on the course weighs about 50-60 pounds. He gets to the country club around 8 or 9 a.m. and plays the course until 7 or 8 p.m.

He has an easy commute to the country club as he lives only a mile away. Methvien plays by himself in the morning, but he often has people who join him in the afternoon.

Methvien says he burns around 3,500 calories a day while playing the course, as he walks an average of 15 miles a day.

“I’m not the biggest, strongest or the fastest anymore, but I’m the toughest,” Methvien said.

He’s never hit a hole in one, but he’s come close on multiple occasions.

His starting drive, or first hit, can fly anywhere from 230 to 300 yards, with 270 being his average.  Right now, his handicap is a 6, shooting just a little above par.

“It hasn’t been easy,” Methvien said.  “A lot of people have told me I couldn’t do it, but it’s achievable.”

A Mississippi band of Lions has proven themselves king of the competition jungle once again by bringing home an international... read more