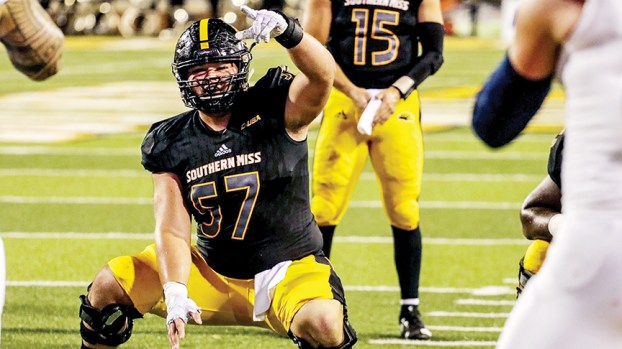 Southern Miss sophomore center and Brookhaven High alumnus Trace Clopton ranks as one of 80 Division centers to be placed on the Rimington Trophy preseason Watch List released this weekend.

While more than a dozen All-America teams are selected annually, the Rimington Trophy committee uses these three prestigious teams to determine a winner:

Because the selectors of these three All-America teams can place centers in a “mix” of offensive linemen that includes guards and tackles, their 11-man first teams can often have two centers. The Rimington Trophy committee’s policy is to count all players that play primarily the center position for their respective teams as centers, even though they may be listed as guards or tackles on the All- America teams.

The center with the most first team votes will be determined the winner. If there is a tie with first team votes, then the center with the most second team votes will win. If there is still a tie, the winner will be determined by a majority vote from the Rimington Trophy committee. The winner will be recognized at the Rimington Trophy Presentation at the Rococo Theatre in Lincoln, Nebraska, on Jan. 18.

The Rimington Trophy is presented annually to the most outstanding center in NCAA Division I College Football. Since its inception, the seventeen-year old award has raised over $4.2 million for the Boomer Esiason Foundation, which is committed to finding a cure for cystic fibrosis.

Dave Rimington, the award’s namesake, was a consensus first-team All-America center at the University of Nebraska in 1981 and 1982, during which time he became the John Outland Trophy’s only two-time winner as the nation’s finest college interior lineman. For more on the Rimington Trophy and a list of past recipients, visit www.rimingtontrophy.com.

The Copiah-Lincoln Community College coaching staff has scheduled the 2019 Baseball Showcase for Aug. 10 at Sullivan Field on Co-Lin’s... read more