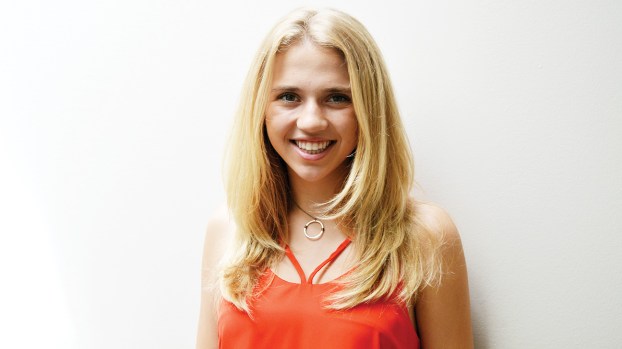 A Brookhaven Academy student has traveled far and wide for opportunities during the summer.

Lucie LeBlanc, a senior at Brookhaven Academy, has stayed busy over her break.

“It really helped me open my horizons,” she said.

LeBlanc, 17, traveled to compete in the International Science Fair in Phoenix, Arizona, back in May. She spent the week learning about advances in science and meeting other students from around the world.

She earned a research grant from Janet Donaldson, a microbiology professor at the University of Southern Mississippi. She’ll continue her research at Southern closer to the end of the summer.

Her experiment focused on commercial yogurts and if the probiotics in them could fight against pathogens.

LeBlanc isolated the probiotics from the yogurt and tested to see if the probiotics and salmonella would bind, showing they did what they were touted to do. She experimented on five commercial yogurts, only two of which actually bonded.

“Most of these yogurt companies were relying on false advertising, which was a big deal,” LeBlanc said.

She then used various detergents on the two remaining yogurts to see if the probiotics would bind with or without protein. Further research on this topic could lead to better working probiotics.

For her to compete with her experiment, she was required to pass through different divisions to make it to the International Science Fair.

LeBlanc placed first at the regional science fair held at USM in Hattiesburg, automatically advancing her past the state fair and earning her a spot in the International Science Fair.

The International Science Fair hosted students from 81 countries all around the world with nearly 2,000 scholars in attendance.

“It was amazing. I was in utter shock,” LeBlanc said.

She didn’t place at the competition, but she was able to make friends from all over the globe.

“I met the whole world in one little place,” LeBlanc said. “I didn’t place or win a prize, but I made international friends.”

LeBlanc got to check out new technology while at the science fair. Drone baseball, virtual reality and building robots were just a few of the things she got to do.

“It was definitely for people who love science,” LeBlanc said.

One of the things that LeBlanc realized while in Phoenix was that she can make something happen, even at 17.

“You don’t have to be Einstein to think,” LeBlanc said.

“It was what people found interesting or what they’re passionate about,” LeBlanc said. “It’s OK to think.”

During her time in Arizona, she was also able to visit the Grand Canyon and attend an Arizona Diamondbacks baseball game. Only two weeks later, she attended governor’s school at the Mississippi University for Women in Columbus.

For two weeks each June, the honors program invites rising high school juniors and seniors from all over the state to enroll in interdisciplinary courses and test their leadership potential, all while meeting lifelong friends in the process.

“It’s very hard to get accepted, so I was very blessed,” LeBlanc said.

The program typically only accepts one student per school. In total, the program generally hosts 70-80 students. The students get to choose two courses, one major and one minor. For LeBlanc, she chose flora in the Civil War as her major and podcasting as her minor.

“It was really interesting to see that,” LeBlanc said. “I actually found it very fun and informative.”

A presentation is given at the end to showcase what they’ve learned to their families. LeBlanc says her flora class made jam for their showcase.

Because of the knowledge she’s learned while at governor’s school, LeBlanc says she can now identify plants, and that she was taught to see them differently.

She stayed incredibly busy this summer, but LeBlanc says her biggest takeaway from it all was learning how to network.

One of four suspects in Brookhaven murder killed in shootout; last suspect turns himself in

Update: Justin Anderson turned himself in to authorities in Natchez Monday night in connection with the murder of Zaria Newton.... read more