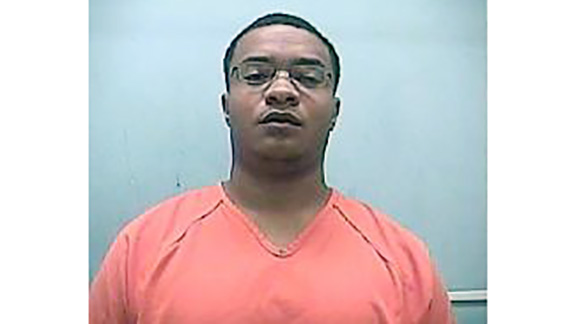 A Natchez man who was acquitted by a Lincoln County jury in May for killing a man at the Oasis Club in 2017 is back in custody, this time on a capital murder charge after a Brookhaven woman was shot to death during a burglary at her Mason Street home.

Adams County Sheriff Travis Patten told reporters Anderson’s attorney called to arrange the surrender with the stipulation that no harm would come to his client and that the Adams County Sheriff’s Office would transport Anderson to Brookhaven.

“His mom brought him into the jail and he turned himself in without incident,” Patten said.

Anderson, who is being held in the Pike County jail, is one of four suspects in the Saturday night burglary in which Brookhaven Police Chief Kenneth Collins said 21-year-old Zaria Antel Newton was killed when she entered her house while the men were still inside.

Jatavious Berry, 19, and Adrian Smith, 18, both of Brookhaven, are in the Lincoln County Jail. Berry was arrested by Brookhaven police Sunday night. Smith was arrested at the Evers International Airport by the Jackson Municipal Airport Authority at 11:47 a.m. Monday and was turned over to U.S. Marshals, according to media sources.

All three are charged with capital murder as police continue their investigation to determine which man was the shooter, Collins told reporters.

Shawan Allen, 20, of Brookhaven, was killed in a shootout with law officers Monday afternoon in the Beauregard community of Copiah County, just north of Wesson.

Deputies learned Monday that Allen was hiding in a trailer on Bahala Road off Hwy. 51, Copiah County Sheriff Harold Jones said. As officers entered the trailer, Allen started firing at them, Jones said in a statement on social media. Multiple officers returned fire, he said.

A Copiah County deputy was shot in the back but was saved by his armored vest. He was transported to a nearby hospital with injuries that were not life-threatening.

The Mississippi Bureau of Investigations is continuing to investigate the officer shooting.

Collins said Newton and her boyfriend received an alert about 10:30 p.m. Saturday that someone was inside their home at 202 Mason Road.

“They got an alert and just went to their house. Police were not notified,” he said.

Brookhaven police posted surveillance video taken inside Newton’s home that appears to show all four men, at least two with guns, searching through the house. The video shows wood flying as the door is broken as they enter the home. The four men rummage through the cabinets, look in the refrigerator and then walk off camera to look in other locations in the home.

The couple confronted the four intruders and Newton was shot at the house. Her boyfriend was not injured, Collins said.

Javian Richardson, Newton’s boyfriend, told reporters Newton saw the intruders when they arrived at the home and shots were fired at her. He said he rushed her to the hospital, where she was pronounced dead shortly before midnight.

Funeral services for Newton are Saturday at 2 p.m. at Mt. Wade M.B. Church in Brookhaven. A visitation is Friday from 1 until 5 p.m. at R.E. Tyler Funeral Home in Brookhaven and will continue on Saturday at 1 p.m. until service time at the church.

Collins said Allen kidnapped his 17-year-old girlfriend in Copiah County and forced her to drive him to Jackson. An off-duty officer spotted the car being driven erratically on Hwy. 51 but Allen escaped into the woods after unsuccessfully stealing a car from a homeowner. More than 30 officers from multiple agencies searched for Allen, who reportedly stole at least two cars during his run to escape, before locating him in the trailer.

Court records show Allen was set to appear in Lincoln County Circuit Court Aug. 14. He was indicted in January 2018 for shooting Lastrangela Thomas at the home she shared with Billy Thomas Sr. on East Congress Street in March 2016. The trial was set for June 5, but was continued on a request by the state, which cited new evidence that could partially exonerate Allen and one of two other defendants who were also indicted.

Anderson was acquitted by a Lincoln County jury in May for first-degree murder in the shooting death of Billy Ray Thomas Jr. after 40 minutes of deliberations in a three-day trial. Thomas was killed in November 2017 as he was leaving the Oasis Club on South First Street.

The jury also came back with a verdict of not guilty for the aggravated assault charge against Anderson for the alleged shooting of Joshua Thomas, who was standing in front of his cousin as they exited the club that night.

Two in race to be leader of Lincoln County tax office