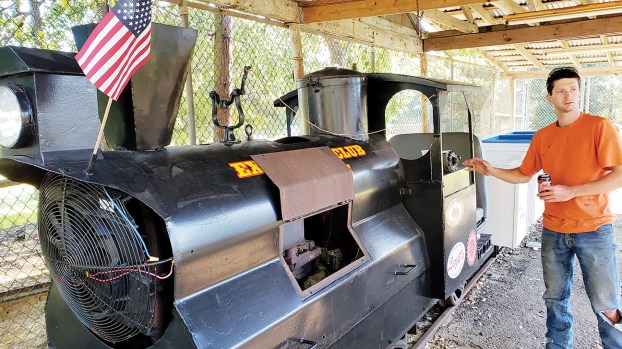 Photo by Donna Campbell Steven Smith helps tune up the Exchange Club Express Wednesday in preparation for the opening of the annual Exchange Club Fair tonight. The fair runs through Saturday this week and then again Aug. 1-3 at Exchange Club Park.

It’s time for sticky cotton candy, carnival rides and yells of “Bingo” every night as the Exchange Club Fair gets underway tonight at 6 p.m. in the service club’s park.

Parking and admission are free. Armbands are $10 for unlimited rides.

“You can ride as long as you want to all night long with that armband,” said Smith.

Smith said Jan Alvey, this year’s fair chairman, has been busy orchestrating the team of volunteer club members as they ready for the fair.

“Jan has really worked hard on this and has gotten everything organized,” he said. “I’ve been told it’s supposed to be a little bigger and better than last year.”

Exchange Club members will staff the pavilion kitchen and the midway kitchen along with help from the Doll’s House Women’s Ministry.

Carnival games on the midway are run by various organizations as a way to raise funds for themselves.

Bingo begins under the pavilion soon after the gates open.

“As soon as they get enough people to start playing. It goes all six nights,” he said. “It’s a big draw for us. We have a lot of participation.”

Smith is hoping for pleasant weather.

“This should turn out to be a great fair, especially this coming weekend,” he said.

The club’s improvement plan this year prior to the fair was to paint the ferris wheel. Weather didn’t cooperate, though, and that project was put on hold. They’ll get back to it and paint the swings as well after this year’s fair is over.

Last year, the Exchange Club Express, which circles the park on its own railroad tracks, got a summer makeover with wider cars and a smoother ride.

Mississippi Lt. Gov. Tate Reeves said at the start of a debate Tuesday night that he has largely avoided criticizing... read more