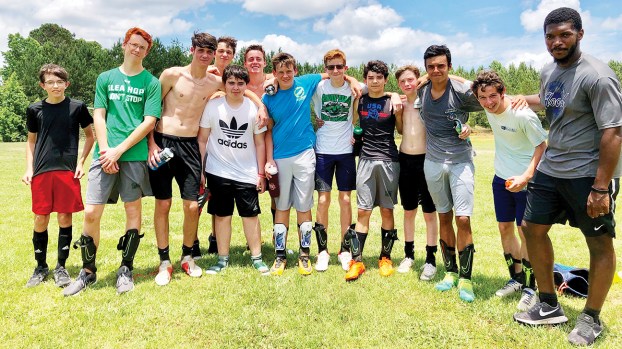 Photo submitted Members of the West Lincoln soccer team pose with new coach Jeremy Johnson, right, after he was introduced to the team earlier this summer. West Lincoln and several other area teams will take part in a 7-on-7 soccer tournament Saturday at Southwest Mississippi Community College.

The West Lincoln soccer program is hosting a 7-on-7 soccer tournament today at Southwest Community College in Summit. The event had been scheduled for earlier in the month, but wet weather forced it be pushed back to this weekend. West Lincoln’s boys and girls’ teams will participate as well as team from Loyd Star, Crystal Springs, Forest High School and Brookhaven Academy.

Matches begin at 8 a.m. and the tournament is double elimination. Admission is $5.The boys’ championship will take place at 5 p.m. and the girls’ finals are set for 6 p.m.

The West Lincoln boy’s program is under the leadership of new coach Jeremy Johnson. Johnson was hired at the beginning of the summer and has hit the ground running. Next season will be year three for the team and the first two seasons the Bears were coached by WL football coach B.J. Smithhart.

Johnson was previously an assistant at Hartfield Academy from 2016-2018. Last year he coached tennis at Columbia Academy. One of his mentors told him that West Lincoln was looking for a soccer coach and the native of Atlanta put in his application. He’s been impressed with the group of players that he inherited.

“With it only being year three of the program, I really didn’t know what to expect, but the guys have improved leaps and bounds over the last two months of training,” said Johnson.

Johnson managed and announced for the Jackson State women’s team when he was in college. He’s also coached at Piney Woods where he was part of taking the team to their first ever postseason win. That’s the same goal he has for the Bears.

“Making the playoffs is one of our goals,” said Johnson. “I think we’ve got a great shot at it.”

Serious soccer players, programs and coaches treat the sport like a year-round activity, even in the oppressive Mississippi Summer heat. Johnson and new West Lincoln girls’ coach Briana Brumfield have had their teams busy all summer. West Lincoln has played scrimmages, attended camps, and worked out as a team at the KDMC Performance Center. Johnson has history coaching at the youth level with Florence Futbol Club and Richland Futbol Club. He was named the MSA Central District coach of the year for 2017-2018.

Brumfield was also hired on at the beginning of the summer and she’s also seen her team grow much in the last two months.

“This summer has been about dedication and improvement for both our boys and girls,” said Brumfield. “We just had a mini camp with the girls led by coach Alex Brown from Southwest and we really worked on fundamentals.”

Both teams are also hosting one final tryout for anyone that wants to participate in the 2019-2020 season. The boys’ tryout will take place from 4:30-6 p.m. Monday at the West Lincoln football field. The girls will have their tryout at the same time Tuesday in the same location. Both are open to any West Lincoln students in grades 7-12 that are interested in playing soccer.

West Lincoln opens its regular season on Nov. 2 when they host Forest. The Bears will once again be in a district made up of Bogue Chitto, Franklin County, Hazlehurst, Loyd Star and Wesson.

The Brookhaven Academy Lady Cougars were a juggernaut last season as they won 24 straight games to begin the season... read more