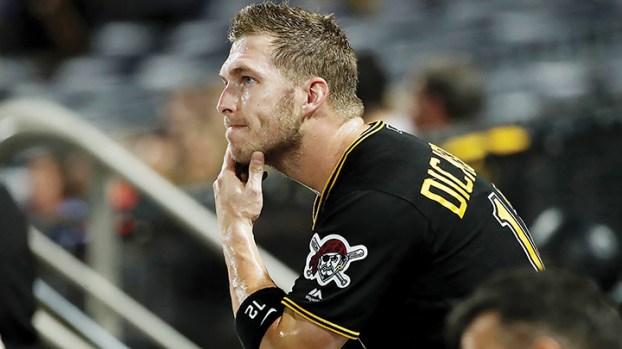 Photo by Gene Pusker Brookhaven Academy alum Corey Dickerson was traded on Wednesday from the Pittsburgh Pirates to the Philadelphia Phillies. Dickerson won the National League Gold Glove for left fielders last season in Pittsburgh and was an MLB All-Star for Tampa in 2017.

The Major League Baseball trade deadline concluded Wednesday afternoon with a flurry of teams swapping players and one of those moves had a Lincoln County connection. Brookhaven Academy alum and reigning Gold Glove outfielder Corey Dickerson was shipped from the Pittsburg Pirates to the Philadelphia Phillies.

Dickerson will join a Phillies outfield rotation that includes MLB superstar Bryce Harper. He missed nearly the first two months of this season battling a shoulder strain. In 141 plate appearances since coming off the injured list Dickerson has posted a .315 batting average. In his final start with the Pirates he had a two-home run, five-RBI night.

The Phillies are tied with the Cubs for the second NL Wild Card spot and are six games behind the Braves in the NL East. The Braves will host the Phillies for a three-game series from September 17-19 in Atlanta.

Dickerson was drafted by the Colorado Rockies in the eighth round of the 2010 draft. He was a 2017 All-Star with the Tampa Rays. Dickerson will be a free agent at the end of this season.

In return for Dickerson the Phillies sent Pittsburg international bonus allotments and a player to be named later.

On Saturday, the eighth annual Trapping For Trent Memorial Trap Shoot was held at the home of Larry Killingsworth. The... read more