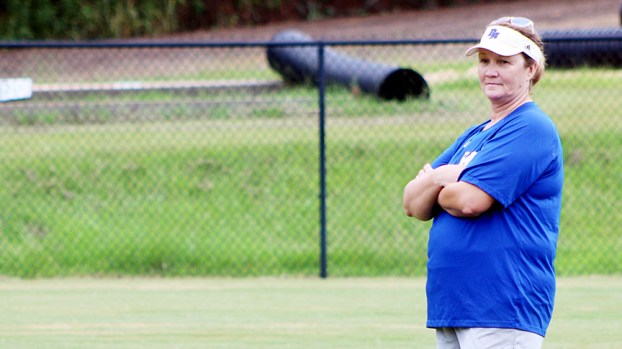 Photo by Cliff Furr BA softball coach Becky Flowers saw her team come back from a 4-0 deficit on Wednesday to beat Copiah Academy 7-6 in a game that was delayed by rain from Monday. The Lady Cougars host Centreville Academy tonight at 6:15 p.m. in their home debut.

Finishing up a game that started on Monday and was postponed to Wednesday due to rain, the Brookhaven Academy Lady Cougars (4-0) came from behind to beat the Copiah Academy Lady Colonels 7-6 on the campus of Copiah-Lincoln Community College.

With their bats flat on Monday, the extra day of practice and rest helped the Lady Cougars as their offense came to life on Wednesday. Both teams played a clean defensive game, with BA committing just one error.

On Monday Copiah Academy batted around in the top of the third and loaded up the bases several times. The Lady Colonels scored four runs in their half of the third to take a 4-0 lead.

Mother Nature showed up though and poured down rain as the Lady Cougars were preparing to come up to bat in the third. After a lengthy rain delay and the field soaking up a ton of water and knowing it would take hours to get the field back in playing condition, both schools agreed to continue the game on Wednesday.

Madison Moak got the bats going for the Lady Cougars in the bottom of the third hitting a leadoff triple and then scored on an RBI sacrifice by Abby Grace Richardson.

The Lady Cougars pulled within two runs in the bottom of the fourth. Kaylie Burgess led off the inning with a hard-hit double into centerfield. Two batters later, Moak scored Burgess on an RBI double into left field.

The Lady Colonels scored their final two runs in their half of the fifth off an RBI double by Lauren Gartman and an RBI sacrifice by Sarah Grace Smith.

Trailing 6-2 heading into the bottom of the fifth, the Lady Cougars took the lead with an offensive surge at the dish.

Batting with one out, Hallie Creel singled into leftfield. Madi Smith kept the bats going with a double into left center field. Emily Clare Felder then brought Creel home on an RBI single into shallow center.

“It was an amazing comeback,” said BA coach Becky Flowers. “Copiah Academy’s hitters did a great job against our pitchers by putting the ball in play and finding hole in our defense. Lucky our girls were patient and found a way to grind back from a four-run deficit to go ahead in the fifth. We battled the heat and some sickness, but our girls really pulled out their team card today and came up with some great hits in clutch situations. I’m so proud of that resilience this early in our season.

Sarah Grace Smith took the loss for the Lady Colonels after going four innings while allowing 11 hits. She struck out four while giving up seven earned runs. Erin Acey pitched in relief.

Bailey led the Lady Colonels at the plate with a double and single and one RBI.

BA opens the home portion of their schedule Friday night when they host Centreville Academy for a 6:15 p.m. first pitch.

The Major League Baseball trade deadline concluded Wednesday afternoon with a flurry of teams swapping players and one of those... read more