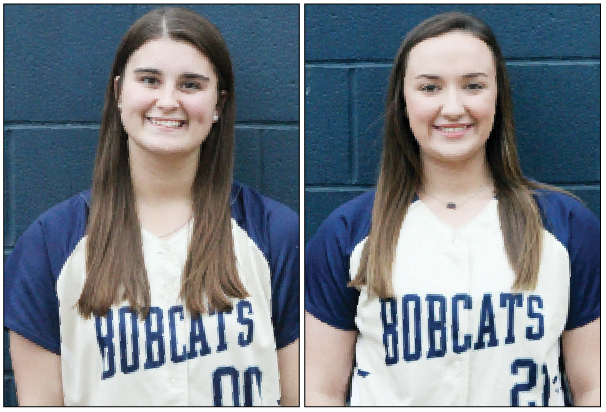 Daily Leader file photos Above left, Bogue Chitto senior Codi Leggett is a leader for the Lady Bobcats’ veteran slow-pitch softball team. Above right, Julianna Frazier added a pair of doubles for the Lady Cats during their 13-4 defeat of Tylertown Tuesday.

BC slow-pitch opens season with 13-4 victory

The Bogue Chitto Lady Bobcats (1-0) opened their MHSAA slow-pitch season on Tuesday with a 13-4 spanking of Tylertown.  BC jumped out 7-0 in the first inning and didn’t let up as they piled up 13 hits in their debut.

Second-year head coach Kris Smith has a veteran team with two seniors in Codi Leggett and Julie Anna Bartram and a seven-member junior class. In the spring the Lady Bobcats were one of the best teams in the area from top to bottom at the plate and Smith hopes that remains the case during the fall slow-pitch season.

“We’ve got an experienced group coming back,” said Smith. “We still had some typical first game jitters. We got under some balls that we could have driven and made more than a couple errors, but I was pleased with the effort.”

Kylie Chapman hit a home run for BC and Julianna Frazier added a pair of doubles. Shyann Jackson and Ally Roberts also hit a double apiece. Chapman, Frazier and Jackson all had two RBIs apiece.

Junior Gracie Guynes was the winning pitcher. Smith started his seniors at the infield corners as Bartram played third and Leggett was on first. Lynsey Cooper started at second and Frazier played shortstop. Kayci Beth Wallace, Kaitlin Poole, Alece Nettles and Chapman were the opening night starters in the outfield for the Lady Bobcats. Ally Roberts and Nicole Lott split time at catcher for BC.

Wallace, Leggett, Nettles, Poole, Cooper and Roberts all hit safely for BC against Tylertown.

The Lady Bobcats are the lone Lincoln County school fielding a slow-pitch team this season as West Lincoln dropped the sport after last season. Bogue Chitto has a strong tradition in slow-pitch and will join a region that includes Wesson, Franklin County, Jefferson County, Crystal Springs and Hazlehurst.

Brookhaven Academy recently held their Pigskins and Pearls event at the school. The ladies only evening is a chance for... read more