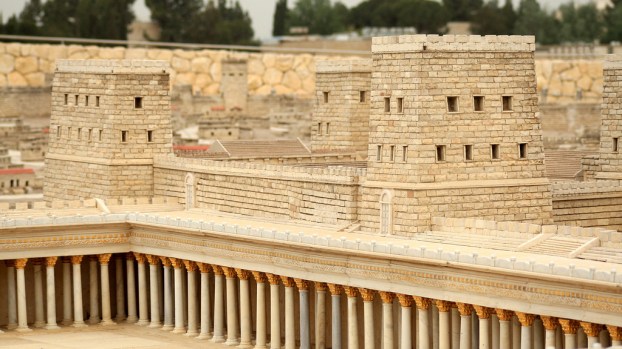 The fall of a fortress and the promise of hope

When I think of Mark Antony, I think of Shakespeare first and Jennifer Lopez’s ex-husband next. I thought of them both, but focused in on the first, when I saw that today was a historical marker of an event linked to Antony’s name.

The Roman politician and general Marcus Antonius, more commonly known to us English-language speakers as Mark Antony, was a supporter of Julius Caesar and administrator of Italy until Caesar’s murder in 44 BC. Antony, 39 years old at the time, joined forces with Caesar’s nephew Octavian and Gen. Marcus Aemilius Lepidus then to eliminate Caesar’s murderers at the Battle of Philippi in 42 BC, before dividing the Republic of Rome amongst themselves. Antony took over Egypt and the area of the Fertile Crescent, where the tiny nations of Judea and Israel were located.

Judea’s king, Herod the Great — also known as Herod I — was known for his colossal building projects throughout his country, including the expansion of the Second Temple in Jerusalem. It was here that he added a fortress that he named in honor of Antony — the Antonia Fortress. This Herod the Great was the same king who ordered the slaughter of all Jewish boys age 2 and younger, in order to eliminate the child he was told had been born in Bethlehem as a king. He wanted no rival for his throne. His attempt failed.

After the death of Herod and the suicide of Antony, the great Antonia Fortress still stood. Archaeologists debate whether this was a one-tower citadel or a four-tower fuller fortress. The historian Josephus described the fortress as a small city with a palace for a king and a military barracks. It was filled with apartments, cloisters, baths, large courtyards and a deep underground passageway.

Titus Flavius, son of Caesar Vespasian, launched his attack on the city of Jerusalem from the Antonia Fortress in AD 70. Charged with quelling the Jewish rebellion of AD 69 — just after his father came to power — Titus besieged the Jews’ capital city, destroying much of it and razing the Second Temple. The famed Antonia Fortress fell in the temple’s destruction.

Today, Aug. 8, marks the 1,949th anniversary of its destruction.

This temple, having stood for nearly 600 years, was begun during the time of the biblical prophet Ezra and the governor Nehemiah. It fell after the life, death and resurrection of Jesus of Nazareth — after he predicted it would do just that.

“Do you see these great buildings?” Jesus asked a disciple who had just commented on how great the temple was.

“Not one stone here will be left on another,” he said, recorded for us in the Gospel of Mark. “Every one will be thrown down.”

When his followers asked for further explanation, Jesus didn’t stress the destruction of the temple that came in AD 70 at the hands of the Romans, who were already a heavy, unwanted presence in Jerusalem. He instead focused on the impermanence of all things and the certainty of the coming of the end days. He encouraged his followers to “stand firm to the end” in order to be saved from the coming destruction of God’s judgment.

When the temple fell decades later, I wonder how many of Jesus’ followers recalled his words and were reminded that they were one day closer to his return? One breath closer to the end of this world, the end of “great things” and governments, the end of suffering?

Did such a great and tragic loss of life in the rebellion and its suppression cause many to mourn, to treasure life a little more, to long for the day when all such would be in the distant past? I would be surprised if it did not.

So many have lost their lives in so many violent acts in our recent memory, all across our state, our nation, our world. In the midst of such tragic loss, may we also be reminded that — at least for believers in Christ Jesus — our greatest hope remains ahead of us in the promise of his return and the acknowledgment that “creation waits with eager longing (to) be set free” … waiting for redemption (Romans 8).

The hope that is promised is as sure for us as the prophesied fall of the temple was for Jesus’ disciples — though they had not yet seen it.

Be encouraged. Share that hope and the hope of our future redemption with those you encounter today.

It’s been 20 years since mass shooting gun violence became part of the national lexicon in America after the Columbine,... read more