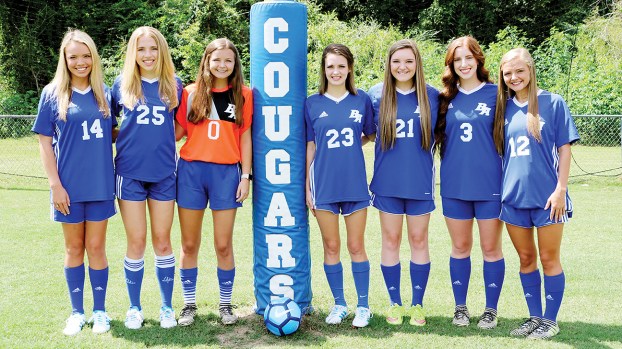 Private schools from around the state will be in Brookhaven this weekend to take part in Brookhaven Academy’s fourth annual Kickoff Classic girls’ soccer tournament. The event was started by BA coach Mark LeBlanc and has 11 teams playing on two fields at the Hansel King Sports Complex.

The home team Lady Cougars kick the tournament off with the opening match today at 5 p.m. against Parklane. BA will then play Bayou Academy from Cleveland at 7:15 p.m.

On Saturday morning, BA plays Copiah at 9:40 a.m. The final pool game for the Lady Cougars is at 2:20 p.m. against Adams County Christian. The top teams from the two pools will meet for a championship match at 6 p.m. Saturday night. Teams from Washington School, Oak Forest Academy, Cathedral, Laurel Christian Academy, the Laurel Lady Hawks, and Hattiesburg Forerunners round out the tourney field. The Lady Hawks and Forerunners are a pair of homeschool based teams.

Captains for BA this season are the senior duo of Lucie LeBlanc and Maggie Sanford. Those two are joined by five other fellow senior starters in Lindsey Norton, Julianna Crosby, Gracie Smith, Kenzie Brown, and goal keeper Olivia Lewis. LeBlanc and Sanford have played varsity since seventh grade and Lewis returns a ton of experience in the net.

Last season, the Lady Cougars made the MAIS playoffs for the first time since 2006. They were knocked out of the first round by defending state champion St. Aloysius 2-0 in a close match.

With seven senior starters returning along with the top two leading goal scorers in junior Makayla Martin and sophomore Anna Caroline Adams, expectations are high for BA to host a playoff game this season and make a deep postseason run.

“Lucie and Maggie have stepped up and set a good example at practice this summer,” said LeBlanc. “The team is starting to gel, and roles are starting to be defined.”

“We have experience at every position this year, we are only missing one starter from last year’s team,” said LeBlanc. “We have some really good young talent to go along with new players who will contribute this year.”

Earlier this week BA took a 4-1 win at ACCS in a district match. Goal scorers against ACCS included Martin with two, Anding with one and Ann Elise Rounsaville with one. Adams racked up three assists.

Last Saturday, they opened the season at an eight-team tournament hosted by Parklane. The Lady Cougars faced Oak Forest in the final match and lost in a penalty kick shootout after the match ended in a 1-1 draw. In pool play BA beat Copiah and Washington by identical 1-0 scores.

LeBlanc says his team is fired up to host their home tournament. The event brings in a nice influx of visitors as some of the teams, such as Washington and Bayou from the Delta, stay in hotels while also eating and shopping in Brookhaven.

“The Brookhaven Recreation Department does a great job getting the facility and soccer fields in prime condition for the tournament,” said LeBlanc. “The feedback is positive from all the teams that have played in previous years.”

General admission is $6 per day and full concessions will be available Saturday. Students and children get in free.

BC slow-pitch opens season with 13-4 victory

The Bogue Chitto Lady Bobcats (1-0) opened their MHSAA slow-pitch season on Tuesday with a 13-4 spanking of Tylertown.  BC... read more