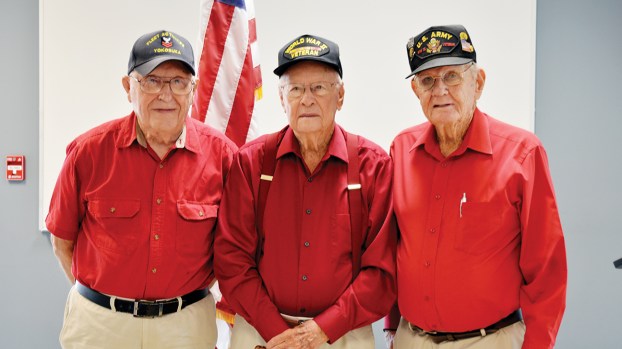 “This is the anniversary of our post that was founded 100 years ago,” Post Commander Keith Reeves said.

The celebration featured guest speaker Pat Baughman Sr. Baughman was a department commander for the American Legion. He joined the Air Force in 1967 and then served in the Mississippi Air National Guard for 35 years before retiring in 2002.

He spoke about the history of the American Legion and how the organization has not only lobbied for improvement regarding veteran’s affairs, but they’ve also sparked change for everyday citizens as well. The American Legion’s posts serve their communities.

“They have built a legacy like no other in the United States,” Baughman said.

Now international membership stands at nearly 2 million, with more than 13,000 posts worldwide. There are posts in all 50 states of the United States, along with the District of Columbia, Puerto Rico, France, Mexico and the Philippines.

The American Legion backs several efforts to benefit those around them. Post 12 sponsors local delegates to attend Boys State, a program that teaches young men the functions of different levels of government. Post 12 also coordinates volunteers who place American flags on veterans’ graves for Memorial Day and Veterans Day.

“We’re a positive influence in the community,” Reeves said.

Reeves said Post 12 is always looking for more veterans to join the organization.

“We’re here to help veterans in any possible way we can,” Reeves said.

Creativity, one block at a time

Area children are invited to build with Legos at the Lincoln County Public Library. Starting Tuesday, the library will resume... read more