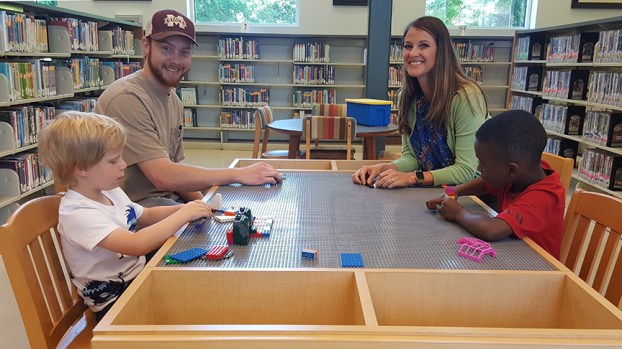 Photo submitted A Lego table was built for the library to use in the after-school program with the help of donations and a local business. Pictured from left are Jase Price, Saul Pickard, Kasie Beth Brown and Braylon Fields.

Creativity, one block at a time

Area children are invited to build with Legos at the Lincoln County Public Library.

Starting Tuesday, the library will resume its after-school Lego Club. The meetings will take place every second and fourth Tuesday of the month from 4 to 5 p.m.

“It gets parents and kids to the library,” Youth Service Coordinator Kasie Beth Brown said. “Everybody enjoys Legos.”

Lego Club doesn’t require any fee or registration in order to participate. The purpose is to give children a fun activity to work their creative muscles.

While Lego Club is meant for school-age children, younger siblings are welcome to tag along. There will be Legos, Duplos and Lego plates supplied by the library for children to play with.

The after-school activity was started in January and attracts about 10-15 kids per meeting.

“We’ve had a great turnout in the past,” Brown said.

Lego Clubs are popular at other libraries throughout the state so Brown brought it to Brookhaven. Since the library already had Legos, it was just a matter of organizing everything.

“Once we got the idea for the table, it all started coming together,” Brown said.

The LEGO table was built by Saul Pickard of Clear Creek Cabinetry Custom Cabinets. The table was made possible through grant monies and donations from the Junior Auxiliary of Brookhaven’s 2018 provisional class, Lincoln County Public Library’s Friends of the Library and other private donations.

Brown says Lego Club is a good program for the library because kids can work their brain and it gives parents something simple and fun to do. It also mixes in other subjects like science and engineering with creativity.

“We want them to have fun,” Brown said.

Each meeting will have a creation theme, but builders can opt out and build whatever they like.

At the end of Lego Club, builders have the option to share with the group what they made. Occasionally creations will be saved and displayed around the library for other patrons to see.

“I hope the kids come and enjoys the library, checks out books and build something cool for other patrons to see,” Brown said.

Police chief: ‘Something needs to change’

A curfew could be an answer to a problem plaguing Brookhaven’s streets after dark — young offenders who act like... read more