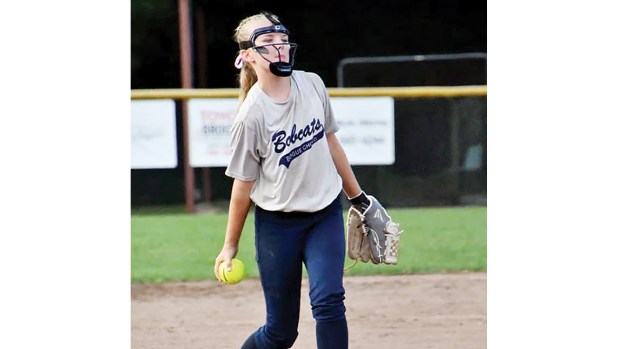 Photo by Stacy Leake Junior pitcher Gracie Guynes delivers to the plate Monday against Warren Central. The Lady Bobcats moved their slow-pitch record to 2-0 with a 10-0 win over the Lady Vikings.

Lady ’Cats have no trouble with Warren Central

The Bogue Chitto Lady Bobcats (2-0) piled up 14 hits Monday to cruise to a 10-0 win over the Warren Central Lady Vikings in slow-pitch action.

Coach Kris Smith saw his team score three runs in the first, three in the second, and four in the third to get the 10-run win.

Junior Gracie Guynes was the winning pitcher as her defense only gave up four hits in the game. WC also committed three errors.

Julianna Frazier hit a double for BC while also adding a single. In total the Lady Bobcats hit 13 singles on the night. Senior Codi Leggett drove in three runs while Kylie Chapman and Kayci Beth Wallace had two RBIs apiece. Julie Anna Bartram, Guynes, and Frazier all had an RBI apiece. Alece Nettles and Lynsey Cooper also hit safely for BC.

Bogue Chitto will get district play started on Thursday when they visit Hazlehurst. The teams will play a varsity double header with game one starting at 5 p.m.

The Brookhaven Academy Lady Cougars went 3-0 in pool play at their own tournament this weekend to advance to the... read more