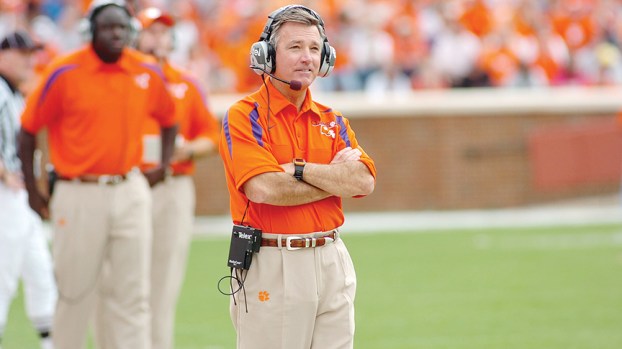 Photo submitted Tommy Bowden was head football coach at Clemson University from 1999 to 2008. He draws on his experience as a coach and a Christian to encourage others to live lives of good character. Bowden is featured speaker at two services at First Baptist Church Sunday.

Bowden to speak to FBC ‘Champions’

Former Clemson University head coach Tommy Bowden will speak during the morning service and at the free event, which is open to the public, at 6 p.m.

Or maybe it’s Tommy, the eldest of Bobby’s sons, best known in football as the head coach of the Clemson University Tigers from 1999-2008. This Bowden carries a similar reputation to his father as being a man who is consistent on the field and off, devoted to character and to his faith in Christ.

It’s the reason Rev. Greg Warnock, pastor of First Baptist, said the church extended an invitation to Bowden to speak.

“He’s known as a strong Christian who speaks his faith to college students, churches, corporations, and with his position as a Division 1 college coach — he’s been very successful — he can speak very well to not only the football player but to the young man and young lady that needs to know Christ,” Warnock said.

Bowden has an impressive resume in sports. He played football at West Virginia University as a wide receiver from 1972 until 1976 under the coaching of his father. After graduation, he built his experience as an assistant coach at his alma mater, at Alabama, Auburn, Duke, Kentucky, East Carolina and Florida State. His first head coach job was at Tulane, 1997-1998, before stepping into the head role for nearly a decade at Clemson.

His involvement with FCA reflects where Bowden’s heart lies — in working with young men and women not just in the sphere of athletics, but in that of spirituality.

“I became a born-again Christian when I was 12,” Bowden said Wednesday. “When I accepted Christ as a 12-year-old, I did it with the wisdom of a 12-year-old. It was more about focusing on what not to do. ‘I don’t drink, don’t cuss, don’t smoke, don’t chew, and don’t go out with girls that do.’”

As he got older, Bowden said, he learned that God had specific things for him to do just like a coach has for players on his team. As a football player, as a coach, a young father, a husband, God’s plan was for him to do all he could to advance God’s kingdom.

Bowden said he spent a lot of time during his 32 years of coaching recruiting players. As he began visiting homes of prospective players 40 years ago, he noticed mothers and fathers would sit with him and their son as he talked about what his football program had to offer. Over the years, he began to notice fewer and fewer fathers present. He saw single mothers do great things to provide for their children, but noticed that so few players had consistent, positive role models in men in their lives.

As a coach, Bowden knew these young men looked to him as a father figure, of sorts, and needed that positive, consistent example of character and integrity. It’s what the coach says is God’s game plan for life — commitment, accountability, responsibility, discipline and sacrifice.

“I was fortunate in that I had a father who had a sincerity and humility that is legitimate,” said Bowden. “It helps when that’s what your parents believe. It was beneficial to me how he dealt with loss, being with his players, taking his players to church. And then it helped me professionally when I became head coach at Tulane. He helped me out spiritually and professionally. I had the best of both worlds.”

Bowden said as he was growing up, he would walk downstairs in the mornings and see his father reading his Bible, every day, without fail.

“Now he’s 89 and I’ll go visit him next week and he’s going to be reading his Bible,” he said.

That consistency of character impacted Bowden and he wants to impact others in the same way.

“Being successful is about making good decisions. A lot of these guys (coming up in sports) are not taught to make good decisions,” Bowden said.

The role models many young athletes have now are people who are consistently making bad decisions, said Bowden, and that has to change.

“They’re looking for direction. Man, you’ve got to learn how to make good decisions when your dad’s not around, when your mother’s not around, your grandmother, your aunt, your coach,” Bowden said. “You need to have a moral compass that helps you to make the right decisions. God is your moral compass.”

People of any age who want to make right decisions must use the resources available to them, the coach said. They need to get involved in a local church, in the FCA, with other believers and — most importantly — get into studying the Bible.

“These are some practical things that might help them make good decisions,” Bowden said.

Bowden will speak at “A Night of Champions” Sunday evening beginning at 6 p.m.

If there is a payphone inside the Pearly Gates, it will be ringing off the hook for J. Ronny Smith.... read more