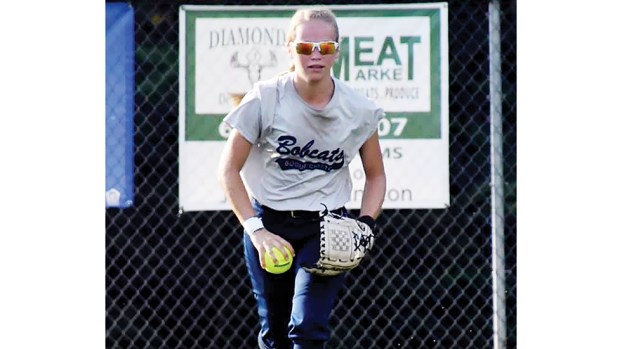 The Bogue Chitto Lady Bobcats (3-0) kept their record perfect in slow-pitch action Tuesday as they took down Brookhaven High 5-3 in a close game in Bogue Chitto.

The game was tied 1-1 early before BC took advantage of timely hits and a few Lady Panther errors to push across three runs.

BHS (2-1) kept things close and stayed within striking distance but couldn’t get timely hits late as the BC defense sealed the win.

“It was a good team win tonight,” said Lady Bobcats coach Kris Smith. “The girls played good defense throughout the game. We made the routine plays when we needed to and had good timely hits when we needed them. Gracie Guynes pitched a good game for us and the defense backed her up. We cut down on errors and didn’t walk that many batters.”

Guynes settled in after a rocky start. Madi Miller and Kaysha Register drew back to back walks to lead things off for BHS. Miller then scored on an RBI a sacrifice fly by Lynsey Nations to put BHS up 1-0.

It didn’t take the Lady Bobcats lone to tie up the game as an RBI single by Kaitlin Poole knotted things at 1-1 in the bottom of the first. The score would remain tied at 1-1 heading into the fourth inning.

Alece Nettles of BC got the bottom half of the fourth started with a leadoff double into left field. Shyann Jackson then reached safely on a BHS errors. Poole was the hero again as she blasted a triple into deep center field that led to her second and third RBISs of the night. She’d then score from third on a Kayci Beth Wallace RBI single.

Batting in the top of the sixth, the Lady Panthers tightened the score up on a two-run home run by Lulu Cook.

“You have to score more than three runs in a slow pitch softball game or you’re not going to win many games,” said Lady Panthers coach Mandy Vinson. “We have to hit the ball better than we did tonight. We had 11 pop ups. We did hit the ball hard, but we need to find a way to get it past defenders and into the open spaces. We’re working some new people into some new spots this year, so we were expecting a couple of errors early on. We have to work on the errors as the season progresses.”

The Lady Bobcats added an insurance run in the sixth as Julie Anna Bartram hit an RBI single to left field.

Guynes picked up the win for the Lady Bobcats going all seven innings while allowing three runs off four hits. Her only two walks were the pair that BHS drew to open the game.

Kyla Henderson took the setback after giving up 10 hits and one earned run. She only walked three batters as BHS committed five errors.

Bogue Chitto was scheduled to play at Hazlehurst today for their region opener, but the game has been cancelled. Hazlehurst did not have enough players to field a team.

On Tuesday, August 20 BC will host new district foe Wesson and Brookhaven will also be in region play as they host North Pike.

BHS travels to Lawrence County today to face the Lady Cougars in their region opener. The Lady Panthers will also play in the Hattiesburg High tournament this weekend.

The Brookhaven Academy Lady Cougars (7-2) moved to 2-0 in district play with a 3-1 win over Oak Forest in... read more