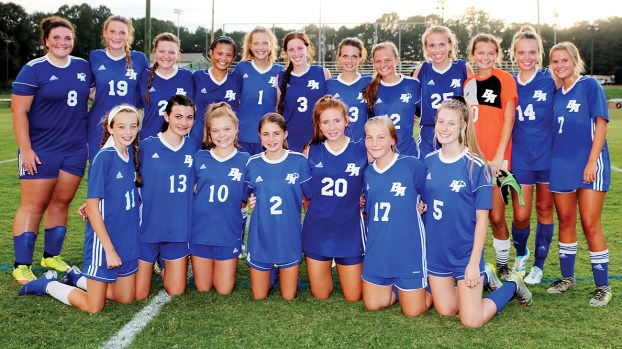 Photo submitted The Brookhaven Academy Lady Cougars moved to 7-2 overall and 2-0 in district play Tuesday with a 3-1 win over Oak Forest. BA plays next at Laurel Christian on Monday at 4 p.m.

The Brookhaven Academy Lady Cougars (7-2) moved to 2-0 in district play with a 3-1 win over Oak Forest in MAIS soccer action Tuesday. In a match that saw the heat index reach 110 degrees, BA was battling the elements just as hard as they were fighting against the Lady Yellow Jackets.

“It was very hot, but the girls never relented to the heat,” said BA coach Mark LeBlanc.

BA controlled the action in the opening 20 minutes but were unable to get a ball into the net. With 15 minutes remaining in the first half senior Julianna Crosby finally broke through to score a goal after receiving the ball via an OF deflection to put BA up 1-0.

Just before half the Lady Jackets tied things up when they used a long ball to get past BA keeper Olivia Lewis. Lewis had initially stopped an OF attack, but her kick was then deflected by a defender and the ball was kicked in from 40-yards out.

In the second half the Lady Cougars dominated the action. Anna Caroline Adams scored two goals, one off a Lucie LeBlanc corner kick and the other off a nice cross from Makayla Martin.

The Lady Cougars next play on Monday, August 19 at Laurel Christian. That match begins at 4 p.m.

The Brookhaven Academy Lady Cougars (9-3-1) moved their district record to 2-0 on Monday with a 12-1 win over Adams... read more