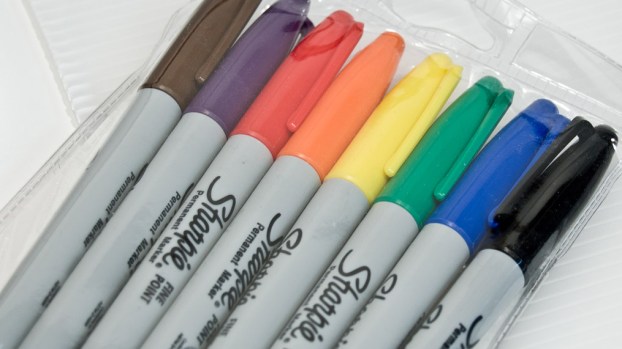 ‘Permanent’ doesn’t have to be

Permanent markers. The name says it all. It’s a marker and its ink is supposed to be permanent.

I’ve used them in marking boards and other construction materials.

I’ve used them to black out information on something I was throwing away.

I’ve used them for labeling boxes and for drawing.

Some people use them to give facial hair to passed out people. I have never done that. But it’s a memorable way to use it, I admit.

My daughter Britain used a permanent marker in a memorable way once.

She was about 3 years old and was staying with Daddy as I worked in my office at home. I was typing away on my laptop and had closed off the hallway and doors to her brothers’ bedroom and the bathroom. Brit had access to her own bedroom, a portion of the hallway and my office.

She had gone back-and-forth between the rooms, carrying toys, singing and just being happy.

Then at one point I realized she was quiet.

That’s when all the “stuff” happens, isn’t it? When the kids get quiet.

I looked up and saw her walking around my office, where I was sitting working but was apparently oblivious to everything else. She had a black permanent marker in her hand — where did she get that?? — and it was easy to see everywhere she had been.

She had started in the hallway and held the marker at about her eye level in her right hand, marking a squiggly line along her path. The line started to the right of her brothers’ bedroom door, on the ancient wood paneling, crossed the stained wood door frame and door, then more hallway and closet and bathroom doors — she skipped across her open door — and into my office.

The line continued across my white painted cabinets and book shelves, across book spines, across the monitor of the desktop computer, along the walls and … it hurts just to say this … across the body of her grandfather’s classical guitar hanging on the wall.

With mouth hanging open, I asked in a panicky voice where she got the marker, what she was doing, why she was making my life so difficult, if she knew where her grandfather would bury my body and probably a few other such inquiries.

She did what any 3-year-old would do. She ran. With the marker. Still. Marking.

I learned that what I thought was child-proofed that day was absolutely not. I learned that Britain could draw a fairly decent straight line for a toddler. And I learned something else.

I learned that permanent marker will come off of most surfaces, if you just have the right remover. “Permanent” didn’t have to be.

I used Goof Off and some other cleaners and salvaged most things. My father-in-law decided not to kill me but took the cleaning of his instrument on himself. I did wind up with a few books that wouldn’t release the ink and so remained “marked” — a visual reminder of the damage.

In the years since, I’ve also learned that if you accidentally use a permanent marker on a dry-erase board it does not have to remain permanent. You can draw over that line with a dry-erase marker and then erase it. It works.

It makes those mistakes easier to deal with if you know they aren’t really permanent. The mistakes we make may leave little marks or scars — reminders to be careful not to make those mistakes again.

But it’s easier when we know that even if a mistake made leaves a scar, we can keep going. We can keep pushing ahead. Making more mistakes, sure, but surviving those, too.

I know God has forgiven my “mistakes” and my “on-purpose” actions, too. I’m humbly grateful. And I look forward to a brighter tomorrow.

That toddler who marked up my office is 18 now, and will start her first classes at college next week. I’m proud of the young lady she is and of the choices she’s making. One sibling and four parents helped her get moved in to the dorm this past weekend and she’s got everything she needs — linens, TV, fridge, laptop, clothes, décor, you name it.

But no permanent markers.

What I learned at my class reunion

The year I graduated from high school, the movie and song “Footloose” became a sensation. That means we were a... read more