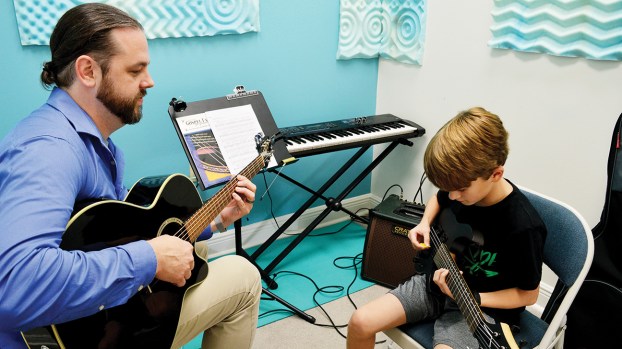 Photo by Gracie Byrne Jaxon Montgomery, a sixth grader at West Lincoln, takes guitar lessons with instructor Gregory Smith at Downtown Music Academy. Montgomery has studied under Smith for a year and a half on guitar, both electric and acoustic.

A business focusing on music lessons is open in downtown Brookhaven.

Downtown Music Academy recently held its grand opening on South Railroad Avenue, only a block over from where it was previously located in Brookhaven Music and Sound. The music academy has been in the new location since March.

“There was very little adaption,” owner Gregory Smith said about their new building. “It was perfect.”

“Everything went really smooth,” Smith said. “The community was more than helpful. They really wanted to see it continue.”

Tony Norton handles instrument repair and rental, while Gregory Smith and others teach lessons. There are eight instructors including Smith who teach lessons at Downtown Music Academy.

He was a double major at the University of Southern Mississippi, where one of his majors was piano, but he’s taught music privately for nearly 20 years.

One compliment he often gets from parents is that taking music lessons helps their children open up and get out of their shell.

He says the kids who take lessons at the academy often form friendships that wouldn’t have happened, because they come from several different schools.

Downtown Music Academy sees students as young as 5 years old to as old as retirees, but the average student falls in the range of 9-16. They instruct around 120 students each week, with Smith teaching 35 of those.

As for what instruments students are taking lessons on, strings take the gold for that.

“Guitar is definitely our highest in demand,” Smith said.

Lessons are typically 30 minutes long, and the middle of the week is generally the school’s busiest time.

Jaxon Montgomery, a student of Smith’s, said if a friend asked him about his lessons, he’d tell them to visit Downtown Music Academy.

For more information, contact Downtown Music Academy at 601-835-6737 or www.dtmusicacademy.com.

A higher percentage of students in the Lincoln County School District are more at risk of falling behind or dropping... read more