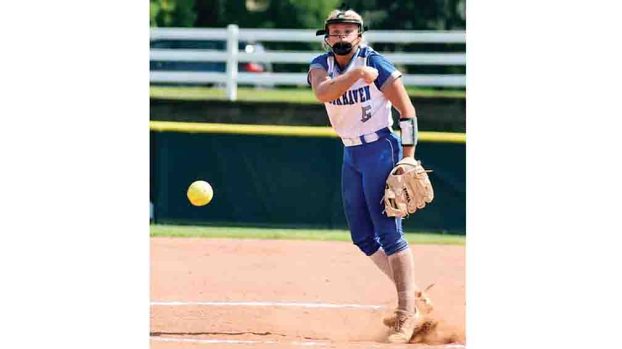 Photo by Gretchen Felder Brookhaven Academy pitcher Madi Smith delivers to the plate on Saturday at Traceway Park in Clinton. The Lady Cougars finished 3-0 in the Tri-County Academy tournament and will play at Silliman Institute in Clinton, Louisiana, Tuesday.

The Brookhaven Academy Lady Cougars (13-3-1) have a six-game winning streak going after picking up three victories this weekend in Clinton at the Tri-County Academy tournament.

In their opener, the Lady Cougars used a two-run fourth inning to take a 2-1 win over Briarfield Academy. In the fourth Abby Grace Richardson opened the inning with a single and then moved to third on a Bailee Goodson double. Both would then score on a Hallie Creel triple. Emily Claire Felder came in as relief and struck out two and gave up two hits in pitching the win.

In game two, the Lady Cougars outhit Leake Academy 8-3 in a 4-1 win. Goodson, Richardson and Madi Smith hit a double apiece and Madison Moak added a home run to power the BA offense. Moak drove in three runs as the Lady Cougars got all four runs in the top of the second inning. Smith and Felder again split time in the circle again with Felder getting the win with three strikeouts in two innings.

BA cruised to a win in game three as the Lady Cougars used eight hits to grab a 6-1 win over Winona Christian. Richardson hit a pair of doubles and drove in two runs. Smith hit a double as well and had one run batted in. Kensy Covington also added one run driven in. Smith picked up the win by striking out five and fiving up two hits in two innings.

The Lady Cougars put their perfect 3-0 record in MAIS district 4-4A play on the line Tuesday night when they travel to Clinton, Louisiana, to play the Silliman Institute Lady Wildcats.